Clarke managed scores of only 10 and 13 to take his series total to 117 runs in eight innings.

Nottingham: Former Australia skipper Allan Border has backed under-fire Michael Clarke, saying he should continue to lead beyond the Ashes series. Australia are fighting for survival in the ongoing fourth Test at Trent Bridge, being behind by 90 runs in their second innings with only three wickets in hand on Friday. They are on the verge of surrendering the Ashes for the fourth consecutive time on foreign soil after going down 1-2 in the series with emphatic losses in Cardiff and Birmingham and conceding a 331-run first innings deficit here at Trent Bridge after being bowled out for 60 in the morning session of day one.

Clarke’s tenure as captain has come under intense scrutiny as he battles to rediscover his batting form. To make matters worse, Australia’s batting order has fumbled repeatedly by England‘s relentless seam bowling attack. Michael Clarke to retire after Ashes 2015 Test at Oval: Reports

Clarke managed scores of only 10 and 13 to take his series total to 117 runs in eight innings at an average of 16.71. Calls of sacking Clarke continue to gain momentum in Australia, but Border was not one of them.

“He’ll know himself if he wants to keep going and if he’s got the hunger for it. He looks like he’s under pressure but that’s understandable with his circumstances and the team’s circumstances.”

Border believes Clarke still has a role to play in the current team and his proven record gives him the right to call time on his career. Australian TV show host performs nude run after Michael Clarke fails to score century in 4th Ashes 2015 Test

“And he wants to perform well. He’s a very passionate bloke, he works hard at his game and he likes to be leading from the front like he has been,” he said.

“It hasn’t quite worked out and I understand all that, but I don’t think we’re ready for that change just yet unless he thinks it’s time. He deserves the opportunity to go out on his own terms.” Michael Clarke believes Australia can still save Ashes 2015 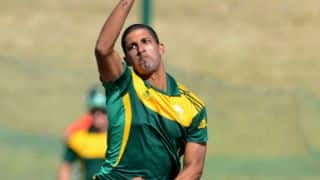 Beuran Hendricks hopes South Africa A will dominate India A