Captain Michael Clarke struck his maiden unbeaten double century while Ricky Ponting marked his return to form with a sparkling 134 as Australia stretched their lead to a mammoth 291 to bat a hapless India out of the game in the second cricket Test on Wednesday. 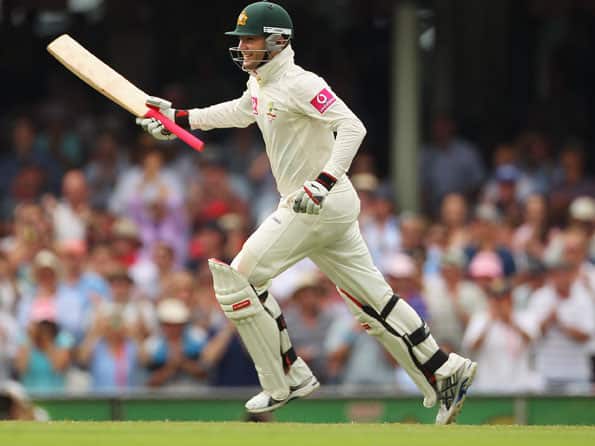 Captain Michael Clarke struck his maiden unbeaten double century while Ricky Ponting marked his return to form with a sparkling 134 as Australia stretched their lead to a mammoth 291 to bat a hapless India out of the game in the second cricket Test on Wednesday.

Clarke, who batted the whole day for an unbeaten 251, and Ponting, who hit his first century in two years, toyed with the ineffective Indian bowling attack as Australia piled up 482 for four in reply to India’s first innings 191 all out.

Mike Hussey (55) was giving company to Clarke at stumps on the second day which turned out to be a lacklustre day for the visitors, managing to take just one wicket.

It will now be a herculean task for the Indian batting line-up, which has come a cropper in three successive innings in the series, to escape from defeat with three days still left on a SCG pitch which does not have much for the bowlers.

India searched for a wickets all day, from the old ball to the new ball but they could not stop the home batsmen from plundering runs at will. They could grab just one wicket — that of Ponting — at the expense of 366 runs, the break-up being 120, 123 and 133 runs from three sessions of play.

Remarkable as Clarke’s power of concentration, range of strokes and stamina were, no less notable was the record 288 runs he forged with his former captain Ponting for the fourth wicket, improving upon their own 210 at Adelaide in 2008 — the previous fourth wicket best between the two nations.

While Ponting ended his century drought of two years, 17 Tests and 33 innings — this being his 40th hundred in his 160th Test, Clarke notched up his 18th in his 78th Test. This was Ckarke’s second century of the Australian summer this year.

Another burgeoning partnership came for the very next wicket as Clarke went for a merry ride with Hussey and put on 157 runs for the unseparated fifth wicket stand by the close.

A feature of Clarke’s innings was his driving on either side of the wicket and the thunderous pulls and repeated use of feet he employed against off-spinner Ravichandran Ashwin.

He was still going hard at the Indian bowlers in the final minutes of the day’s play and a triple century now appear within his reach.

Earlier, India went wicketless in the morning session and had to wait till the second new ball in the post-lunch session to get the breakthrough with Ponting tamely gliding a catch to Sachin Tendulkar at point off the bowling of Ishant Sharma.

But that was not before he had put on record 288 runs for the fourth wicket with Clarke.

Ponting, overnight 44, reached his century just after lunch but it did not arrive without its moment of anxiety as he pushed Ishant to mid-on and took off almost immediately.

He was still a fair distance away from the safety of his crease when Zaheer Khan at mid-on fielded the ball and took a shy at the non-striker’s stumps. Fortunately it did not hit the stumps and Ponting had to dive full stretch to reach his crease.

This ended the drought of century for Ponting who last reached the three-figure mark against Pakistan in January 2010 ?- a knock of 209 at Bellerive Oval, Hobart. The former Australian captain had to wait for two years, 17 Tests and 33 innings to break the logjam in his career.

Clarke batted with aggression and it made no difference to him that India had taken the second new ball after 82 overs. He drove Zaheer Khan through covers and then pulled him to mid-wicket with complete disdain.

New man Michael Hussey also looked eager to join the party and he drove his first ball from Ishant Sharma through covers for four. He then pulled Ishant to midwicket as Australia looked to press on with the advantage.

Clarke went past his career-best 168, made against New Zealand at Wellington in 2010, with a thunderous cover-drive off Umesh Yadav in the final over before tea.

For most part of the second session, India looked to rush through the remaining overs for the second new ball with the likes of Virat Kohli and Virender Sehwag, and of course regular spinner Ravichandran Ashwin operating.

Indeed, India brought on Kohli to bowl as early as in the fifth over of the afternoon session, the 58th over of the innings.(PTI)