Riding on centuries by Ed Cowan and skipper Michael Clarke, Australia reached 306 runs for the loss of four wickets at Tea on Day Four of the first Test against South Africa at Brisbane on Monday. 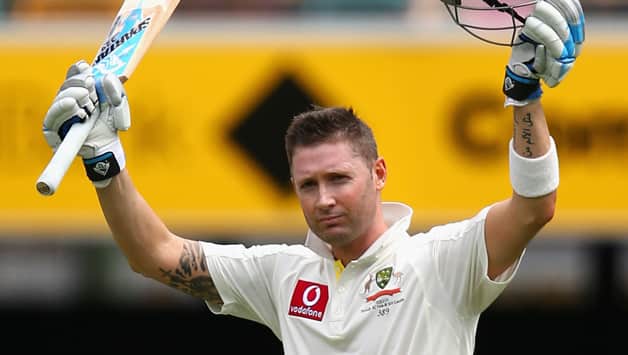 Ed Cowan and Michael Clarke scored centuries as Australia closed in on South Africa‘s big first innings score on the fourth day of the first Test on Monday.

The pair put on a record 259 runs for the fourth wicket at the Gabba before opening batsman Cowan was out freakishly shortly before tea for 136.

At the interval, Australia were 306 for four with Clarke unbeaten on 126 and Mike Hussey on one, trailing the Proteas by 144 runs with four sessions left in the first Test of the three-match series.

Cowan had the misfortune to be run out when he backed up too far at the non-striker’s end and was out when bowler Dale Steyn got his fingers to a stinging Clarke drive and deflected the ball onto the stumps.

The pair’s partnership eclipsed the previous highest stand for the fourth wicket in Tests against South Africa of 169 set by Mark Taylor and Mark Waugh at Melbourne in 1993.

Up until Cowan’s unorthodox dismissal, Australia had been in full flow after resuming the day at 111 for three.

Cowan broke through for his first century in his eighth Test match when he pulled Vernon Philander for four shortly after lunch.

But he was almost run out minutes later when he scampered for a single before he was sent back by Clarke and was fortunate that Steyn’s throw missed the stumps with Cowan out of his ground.

Cowan was also dropped on 123 by Steyn hooking Rory Kleinveldt to fine leg.

Steyn appeared to be distracted by Jacques Rudolph going for the catch and was not in position when the ball hit his hands.

Skipper Clarke reached his 20th Test hundred 40 minutes later with a push behind point off Kleinveldt to dash through for a single.

It was his third century of the year after his unbeaten 329 and 210 against India at home in January. As captain he is averaging over 60 with the bat.

The South African attack was guilty of drifting at times and skipper Graeme Smith, without the services of incapacitated JP Duminy, brought himself into the attack with his off-spin to add variety to the five-prong pace attack.

Duminy, who can bowl spin, ruptured his Achilles tendon while warming down after Friday’s first day’s play and will be out for six months.