Michael Clarke enforces follow-on for first time in career as captain; England trail by 332 runs in 5th As

England were made to follow-on on the third day of the fifth and final Ashes Test at The Oval on Saturday.

England were made to follow-on on the third day of the fifth and final Ashes Test at The Oval on Saturday. They were asked to bat again after being dismissed for 149 in reply to Australia‘s first innings 481, a deficit of 332 runs. Moeen Ali was last man out for an innings top score of 30. Fast bowler Mitchell Johnson took three for 21, including two wickets in two balls to end the innings to dismiss Mark Wood (24) and Ali, who put on 57 for the ninth wicket. Live Cricket Score England vs Australia, The Ashes 2015, 5th Test at The Oval, Day 3

“I don’t think he wants to bat again.” @shanewarne told us this AM he expected Clarke to enforce the follow-on. https://t.co/5H6dBnUxCx

Australia captain Michael Clarke enforced the follow-on as his side looked for a consolation victory in this series. His decision also increased the possibility of a third successive finish inside three days this Ashes after England’s eight wickets and innings and 78-run wins in the third and fourth Tests at Edgbaston and Trent Bridge respectively. England, who have already regained the Ashes, lead the five-match series 3-1. LIVE CRICKET SCORECARD: England vs Australia, 5th Test, The Oval, Day 3 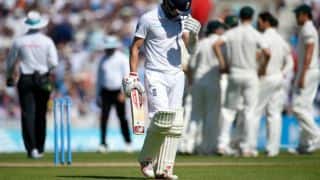 England bowled out for 149, will follow-on, on third day of 5th Ashes Test at The Oval 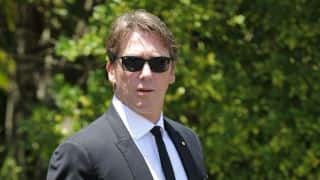