Skipper Michael Clarke on Friday welcomed the likelihood of Australia having a surfeit of fit pacemen ahead of a demanding season of cricket climaxing with next year’s ICC World Cup 2015.

The gruelling schedule of international matches at home began on Wednesday, with the first of three Twenty20 matches against South Africa. That will be followed by five One-Day Internationals (ODIs) against the Proteas, a four-Test series against India and a limited overs tri-series involving England and India before the one-day World Cup in February-March.

Pat Cummins, who has played little in the last three Australian seasons through injury, made an encouraging return to international cricket in Wednesday’s T20 loss to South Africa. Josh Hazlewood, whose last international appearance was over nine months ago, starred for his New South Wales state side in the recent domestic one-day tournament.

Test paceman Ryan Harris, meanwhile, returned to action this week after being sidelined since his match-winning efforts in the Cape Town Test against South Africa back in March. And James Pattinson, who hasn’t played a first-class game since that Cape Town Test, is also on the comeback trail.

“I think it’s great for Australian Test cricket that a lot of our fast bowlers are on the mend,” Clarke said at the launch in Sydney of his latest book, “Captain’s Diary”. “Josh Hazlewood has done really well in the one-dayers, Ryan Harris is getting fitter and stronger, James Pattinson is back as is Pat Cummins. That’s a real positive sign for Australian cricket, moving forward. Over the next 12 months, I think we’re obviously going to need them all.”

Clarke said Australia’s disastrous two-Test hammering by Pakistan in the United Arab Emirates this month would serve to spark the players in all forms of the game. “I guess that’s extra hunger and fire in the belly for us as the Australian team, to make sure we’re at the top of our game, whether it be T20, one-day cricket or Test cricket,” he said.

Pakistan inflicted a 356-run defeat in the second Test in Abu Dhabi on Monday — Australia’s third heaviest loss in all matches — to take the two-match series 2-0. 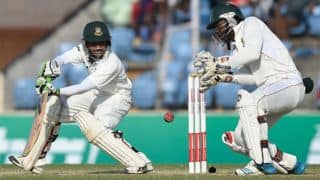