Injured Australia captain Michael Clarke could miss the upcoming Tests against India as he focuses on being fit for next year’s ICC World Cup  and Ashes series, a report said on Monday.

The opening batsman, 33, has never missed a home Test but Cricket Australia team performance chief Pat Howard said “everything is on the table” for Clarke, including possible surgery.

The 107-Test veteran will be examined by experts this week after scans on his troublesome left hamstring, which he hurt while batting during Friday’s one-day win over South Africa, proved inconclusive.

“We are putting the World Cup and Ashes right up there and if he’s right for the Indian Test series so be it,” team performance chief Pat Howard told Fairfax Media.

We are putting the World Cup and Ashes right up there and if he’s right for the Indian Test series so be it. But we’ve seen him rushed back and what we’d hate is for him to play a Test or two and then break down.

“But we’ve seen him rushed back and what we’d hate is for him to play a Test or two and then break down.

“Everything is on the table at this point. We saw (paceman) Nathan Coulter-Nile go through hamstring surgery and come back in eight weeks, so obviously that is one possibility.”

Clarke’s playing future has become uncertain after he suffered his third hamstring injury since August, while he is regularly troubled by a degenerative back complaint.

His problems have resurfaced at the start of a busy schedule, with Australia beginning a four-Test series against India on December 4 in Brisbane, followed by a home triangular tournament.

From February, Australia are co-hosts of the World Cup and in July they will be touring England for the high-pressure, five-Test Ashes series.

“I have talked about the priorities and what they are. Sometimes you have got to take a little bit of a long-term and a medium-term picture,” Howard said. “If we do this well, we can get extra years out of Michael who is a world-class player, rather than thinking in days and tournaments We have an opportunity to really get the best out of the last couple of years of his career.”

Reports said wicketkeeper Brad Haddin will act as Test captain if fit for the India series, and George Bailey will continue to captain the ODI team against South Africa in Clarke’s absence.

Clarke has said he has no intention of quitting limited-overs cricket after the World Cup, but his future in the format is likely to be discussed after the February-March tournament, Fairfax Media said.

“Getting to the World Cup is important and how we get through this progress and rehab program will be important first,” Howard said “Anything past that we will assess how his body has come through that period and it will be a consultative process.” 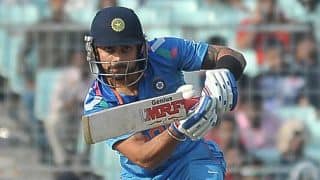