The Australian captain hobbled from the ground amid initial fears he would not be fit for second Test.

Skipper Michael Clarke suffered another hamstring injury setback as India stayed on course for a memorable come-from-behind win in the first Adelaide Test on Saturday. Clarke pulled up sharply while fielding and left the field with the team physio, looking in a bad way with a right hamstring injury.

The Australian captain hobbled from the ground amid initial fears he would not be fit to lead his country in the second Test, getting underway in Brisbane on Wednesday. A team spokesperson said Clarke had left the ground for scans to assess the injury. He appeared to have difficulty getting into the car that took him to the hospital.

Clarke suffered a recurrence of his long-term back injury while batting on Tuesday’s opening day which forced him to retire hurt. He had injections to soothe spasms in his back and returned to the crease the next day to complete a century. Clarke’s latest setback continued Australia’s frustration to push on for victory on the final day of the first Adelaide Test.

The Australians grabbed two wickets before lunch but were being resisted by opener Murali Vijay and skipper Virat Kohli, who batted through the entire middle session in an unbroken 148-run stand. 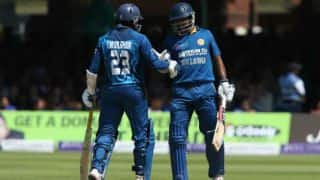