Michael Clarke revealed the names in an interactive session with fans on Twitter.

Melbourne: Australian Test captain Michael Clarke considers legendary Sachin Tendulkar as one of the top five greatest cricketers he has played against during his international career. During an interaction with his fans on twitter, Clarke revealed that Tendulkar is among five of the best players he played with or against in his career.

Clarke, who has retired from the ODI and T20 formats, is currently in the West Indies for a Test series against the hosts. Asked to name the quickest bowler he has ever faced, Clarke took Pakistani maverick Shoaib Akhtar‘s name.

The 34-year-old, however, called England all-rounder Andrew Flintoff as the best bowler he padded up to. In lighter vein, Clarke was asked about the most untidy player in the Australian dressing room and he responded with his predecessor Ricky Ponting‘s name. 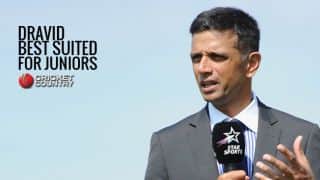