Clarke seemed to have recovered from his hamstring injury after the batsman joined the team' training.

Australian captain Michael Clarke, who has been under intense emotional stress after the passing away of his brother-like mate Phillip Hughes, has been relieved of addressing the customary press conference on Monday ahead of the first Test against India starting December 9, here.

Clarke, who has been with the Hughes family since the South Australia batsman’s passing away, has been relieved of all his media duties irrespective of the fact that he plays the first Test or not. Pace spearhead Mitchell Johnson will carry out the duties of Clarke and will address the pre-match conference, according to a report in news.com.au.

Still doubtful for the opening game, Clarke seemed to have recovered from his hamstring injury after the batsman joined the team’ training at the Adelaide Oval. Cricket Australia CEO James Sutherland has already mentioned that there was no pressure on any player to participate in the first Test of the four-match series if they are not up to it.

Clarke seemed to be the most affected – he broke down while addressing the media on Hughes tragedy and also choked in the funeral speech – in the Australian camp alongwith David Warner and Aaron Finch. From being part of the Australian team in Hughes’ debut Test against South Africa in March 2009, to being one of the pall bearers in the left-handed batsman’s last journey, Clarke has seen it all. 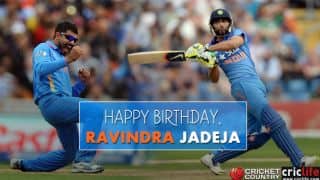