Michael Clarke's rich vein of form continued with another big innings which threatened to give Australia an outside chance of beating South Africa in the first Gabba Test. 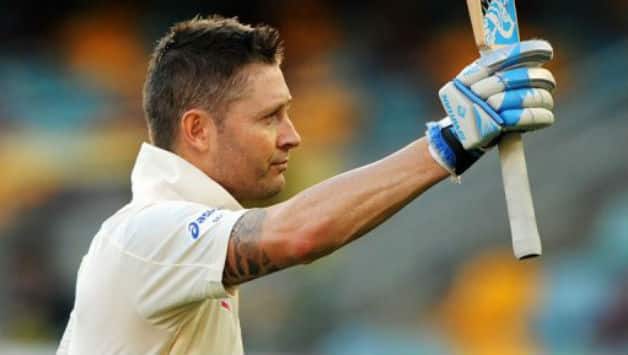 Michael Clarke‘s rich vein of form continued with another big innings which threatened to give Australia an outside chance of beating South Africa in the first Gabba Test.

Skipper Clarke ripped apart the vaunted Proteas’ bowling to be undefeated on 218 at stumps, batting right through the fourth day, to help push the Australians 37 runs ahead of the world’s best team with a day to play.

It continued an outstanding 2012 for the Australian captain following his unbeaten 329 and 210 against India at home last January.

He has maintained an average of above 60 since assuming the captaincy earlier this year from Ricky Ponting and is in the form of his life.

“I’ll say it’s coincidental, I’m trying to get better every day. It’s been to lead the way with the bat,” Clarke said.
“I’ve said for a while now, it’s not what you say, it’s what you do and Ricky (Ponting) certainly did that as captain of Australia for a long period of time.

“He was scoring lots of runs and the boys followed. Hopefully I’ve got a few left in me.”

Clarke, who raised his 20th Test century in his 84th Test, said he had followed advice from Australia legspin great Shane Warne on his confident batting approach.

“One of things Warney’s taught me over the years is the better the bowling, the more positive you’ve got to be and that was certainly my intent from the first ball I faced yesterday,” he said.

“That is I wanted to be nice and positive and play my way, and put it back on the South African bowlers because I know they’re a very good attack.”

Although Clarke has been at the crease for 504 minutes with more time out in the middle to come on Tuesday, he hardly flagged in Monday’s final session of play.

“For me it’s about being fit and strong,” he said. “Over the last couple of years I’ve taken myself away from the team and done my own boot camp for my mind, as much as my fitness.

“That couple of weeks away of preparation has held me in really good stead over the last couple of seasons.”
Clarke ensured in large partnerships with Ed Cowan and Mike Hussey that Australia would not be beaten in the first Test and go to Adelaide 1-0 down in the series to the Proteas.

His 259-run stand with opening batsman Cowan, who made 136, was the highest fourth-wicket partnership by Australia at the Gabba, surpassing Clarke and Hussey’s 245-run effort against Sri Lanka in 2007.

Clarke also put on an unfinished 188 runs for the fifth wicket with Hussey, who maintained the momentum with his lively unbeaten 86 off 109 balls to ram home the advantage.

Ranji Trophy 2012: Punjab thrash Bengal by an innings and 27 runs