Clarke will miss the series due to a persistent hamstring injury.

Clarke reinjured his troublesome left hamstring as he made just 11 in the Australian innings of Friday’s 32-run win over the Proteas in the series opener in Perth and took no further part in the game.

Scans on Saturday confirmed that Clarke would miss the remaining four ODIs against the Proteas, but no decision has been made on his availability for the opening Test against India in Brisbane, starting on December 4.

“Michael had scans today in Perth for his ongoing left hamstring problem and as a result has been ruled out of the remaining matches in the ODI series,” Cricket Australia team doctor Peter Brukner said.

“Michael will return to Sydney for further treatment and an update on his fitness for the first Test in Brisbane will be made in due course.”

Clarke, 33, has injured his hamstring three times since August, raising concerns about his playing prospects this southern summer season and beyond.

With the World Cup just three months away, any more setbacks could leave Clarke struggling to take part in the tournament.

“It’s never easy when you’re losing one of your best players, but that’s part and parcel of sport these days,” Lehmann said.

“Players have got to be adaptable. We’d love him there. But you can [still] win every game you play (without him). With the 11 that go on the field, we have full faith in winning each and every game.”

All-rounder Steve Smith will replace Clarke for Sunday’s one-dayer against South Africa at the WACA Ground, with George Bailey to captain the side. 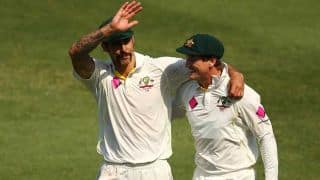