Australia Test captain Michael Clarke has revealed that his cricket academy will form a big part of his future, insisting that he is looking forward to impart his cricketing skills to the talented beginners. Clarke, who led Australia to their fifth World Cup title, said that the academy and the Scots College is a big part of his future, adding that it would be great to see boys and girls have the opportunity to learn from someone’s experiences, News.com.au reported. Michael Clarke rates demise of Phil Hughes as lowest point in his career

The veteran captain also said that he has always loved sport and believes that the game owes him nothing as he owes the game everything. Clarke announced his retirement from the shorter format of the game following the conclusion of the World Cup. Clarke will however continue to captain Australia in Tests. The successor to Clarke in the shorter format has not been announced yet. Michael Clarke backs Kevin Pietersen to play in Ashes 2015

Clarke has played for Australia on 245 occasions and scored 7981 runs at an average of close to 45. he has also scored eight centuries and 58 half-centuries, including one at the ICC Cricket World Cup 2015 against New Zealand. Michael Clarke to lead Melbourne Stars in Big Bash League 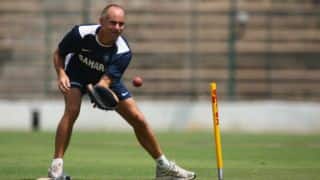