Australia captain Michael Clarke won his third Allan Border Medal as the nation's cricketer of the year at an awards ceremony in Melbourne on Monday. 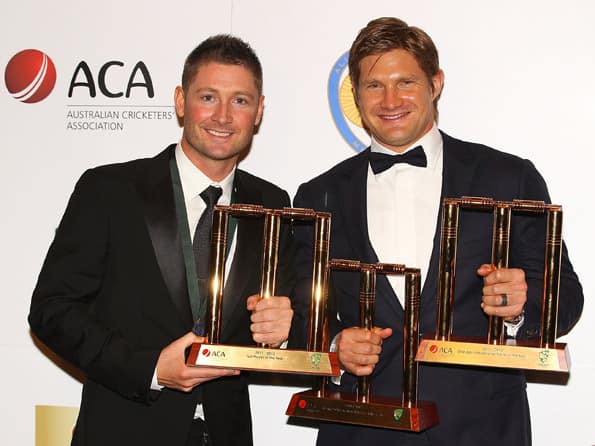 Australia captain Michael Clarke won his third Allan Border Medal as the nation’s cricketer of the year at an awards ceremony in Melbourne on Monday.

Clarke, in his first year as Australia captain after taking over from Ricky Ponting, polled 231 votes from players, media and umpires.

Mike Hussey was second on 174 with all-rounder Shane Watson third on 166 after the voting period which ended on February 24.

Ponting, who was dropped from the national one-day team last week, finished fourth on 141 votes.

Clarke also claimed the Test player of the year award on a countback from Ponting.

Watson beat Clarke on a countback to claim the one-day international award and opening batsman David Warner, who hit two centuries in his debut Test season, won the Bradman Young Cricketer of the Year Award.

Test great Shane Warne, who retired in 2007 with 708 Test wickets from 145 matches, was officially inducted into the Australian Cricket Hall of Fame at the awards ceremony. (AFP)