Australia skipper Michael Clarke led his team to 315 for seven with a brilliant century in the second One-Day International (ODI) against England at Old Trafford, Manchester on Sunday.

Australia won by 88 runs
Man of the Match: Michael Clarke 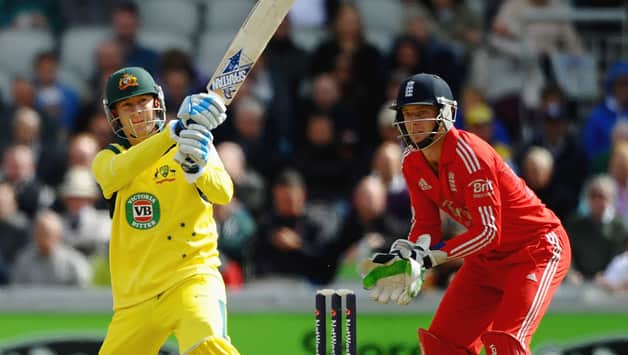 Australia skipper Michael Clarke led his team to 315 for seven with a brilliant century in the second One-Day International (ODI) against England at Old Trafford, Manchester on Sunday.

Winning the toss and electing to bat first, England got off to a good start as Steven Finn dismissed opener Shaun Marsh in the first over of the innings as the left-hander tried to drive an away going full length delivery and managed to get a thick outside edge. The visitors were one down with no run on the board.

Coming in to bat at number three, Shane Watson played an cautious innings. He added 60 runs for the second wicket with the Aaron Finch. In his 51-ball knock of 38 he hit six boundaries and a massive six.

However, the steady knock came to an end with a mistimed shot as Watson looked to cut a short of good length delivery but managed to find an edge which was safely taken by the wicketkeeper. Although the all-rounder was adjudged out after checking television replays, Watson seemed disappointed with the decision.

However, opener Finch continued to score freely. He hit four balls to the fence and one out of the ground in his run-a-ball knock of 45. In company of skipper Clarke he added another crucial partnership of 55 runs for the third wicket before gifting his wicket to James Tredwell.

George Bailey walked into bat with the match still in balance. It was from this point that the visitors seized their chances and dominated the innings. Clarke and Bailey added 155 runs for the fourth-wicket partnership in 130 balls to put Australia in a commanding position. Bailey was the aggressor in their partnership as he slammed five boundaries and four sixes in his 67-ball knock of 82. When Bailey departed Australia were comfortably placed at 271 for four with six and half overs remaining in the innings.

However, the day belonged to the Australian skipper who played a fine innings of 105. His knock included 14 sublime boundaries. Although the innings was dominated by the batsmen, Boyd Rankin managed to return with decent figures of two for 49 in his 10 overs.