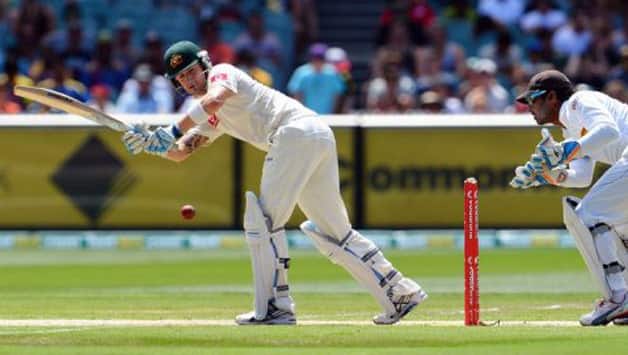 At lunch, the Australians were 238 for three with Michael Clarke unbeaten on 56 © AFP

Captain Michael Clarke trumped Ricky Ponting as Australia’s highest runscorer in a calendar year with another century as his team clamped an iron grip on the second Test against Sri Lanka.

Clarke eclipsed Ponting’s previous national record of 1,544 runs and went on to score 106 to continue his stellar 2012 as another heavy defeat loomed for the hapless Sri Lankans in Melbourne after losing the opening Test by 137 runs.

It was yet more misery, though, for Shane Watson, who missed out on his third Test century and his first hundred since October 2010 when he fell for a Sri Lankan sucker punch on 83.

At the close on the second day, Australia were 440 for eight with 200-wicket paceman Mitchell Johnson enjoying a great all-round match with his seventh Test half-century on 73 and Nathan Lyon yet to score.

Australia had extended their lead over the tourists to 284 runs with two wickets intact, leaving the undermanned Sri Lanka, skittled for 156 off 43.4 overs on Wednesday, looking down the barrel of defeat on the third day.

“It’s nice to get that monkey off my back to get my first hundred in Melbourne,” Clarke said.

“In regards to beating Ricky, in my eyes he was certainly the greatest batsman I was lucky enough to play with so to beat any record that Ricky holds is very special, that’s for sure.”

Clarke went into the Melbourne Test needing 56 runs to break Ponting’s national record and has now amassed 1,595 runs at 106.33 in Australia’s final Test of the year.

“Numbers have never really bothered me too much,” Clarke said. “It’s nice to be making runs and leading by example as one of the leaders in the team and the captain of the team, but to me it’s about winning games.”

Clarke was finally out when he was caught by rival skipper Mahela Jayawardene in the slips off Shaminda Eranga after 251 minutes at the crease.

The Australian captain, who was in doubt ahead of the game with a hamstring injury, has also scored a triple century and three double centuries in an extraordinary 2012.

But it was not a chanceless innings, with Clarke having a let-off in Rangana Herath’s 17th over when substitute ‘keeper Kumar Sangakkara missed a tough stumping chance on 54.

He was also dropped by Tillakaratne Dilshan on five late on Wednesday’s first day.

Clarke put on 194 runs for the fourth wicket with Watson, who soon followed his skipper back to the dressing room after again failing to convert a half-century into a ton.Watson’s patient 265-minute vigil ended when he pulled Dhammika Prasad straight to Thilan Samaraweera lying in wait at deep mid-wicket and he trudged head down from the ground.

It was the 19th time Watson has failed to convert a Test half-century into three-figures.Matthew Wade only lasted six balls for one before he pulled Prasad to Eranga two overs later and it took a freakish one-handed catch from Herath to dismiss Mike Hussey at long-on for 34.

Hussey has proved Sri Lanka’s nemesis with five centuries in six previous Tests.Sri Lanka’s injury problems were magnified with paceman Chanaka Welegedara pulling up inside the opening half-hour while bowling and gripping his right hamstring and is unlikely to bowl again in the Test.

The tourists went into the second day already without wicketkeeper Prasanna Jayawardene due to a hairline thumb fracture suffered while batting in his team’s first innings on Boxing Day. Sangakkara took over behind the stumps.

“It’s a long way from ending this game and we still need a good batting innings from the time we hopefully get them out in tomorrow’s first session and see what we can do from there,” Sri Lanka batting coach Marvan Atapattu said.