Michael Clarke says a series win in South Africa will make it a special summer.

Australia cricket captain Michael Clarke feels that the decider of the three-Test series against South Africa starting Saturday at the Newlands in Cape Town is the biggest Test of his decade-long career.

Clarke said it was special to win the Ashes 5-0 at home and a series win in South Africa will make it a special summer.

“Test cricket does not get any better than this. The third Test against South Africa, beginning in Cape Town tomorrow, shapes as one of the biggest Tests of my decade-long career,” Clarke wrote in his column in The Daily Telegraph.

The Test series is evenly balanced 1-1 and Clarke knows that beating World No.1 South Africa in their own backyard will be tough.

“We all know the Ashes is special and to beat England 5-0 was amazing. But to be lining up for the deciding Test of a delicately balanced series against the top-ranked team in their own back yard is as exciting as this game gets. It is a wonderful opportunity for us to finish the summer on a high,” he said.

Clarke hoped that his team can repeat the performance of the summer in Newlands again.

“I’m so proud of what the guys have achieved over the last few months and hope we can continue that at Newlands. South Africa proved what a great team they are by coming back hard in Port Elizabeth but it was only a week earlier that we had a strong victory at Centurion Park, so we know that if we play our best cricket we can beat them. It’s been attacking, high-quality cricket from two very competitive teams that has seen both Tests finish in four days,” he said.

Clarke feels the intensity of cricket against South Africa has always been great.

“The last time we came here two and a half years ago the series was tied at one-all after two remarkable Tests but sadly there was no decider. This time there is and we can’t wait. Exactly what conditions we will face in Cape Town remain a bit of a mystery. Traditionally it has helped seam bowlers, but with South Africa comfortably winning in Port Elizabeth on a dry, grassless wicket I’m not quite sure what to expect,” he said. 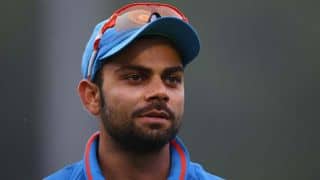