Michael Clarke to play in tour game against Pakistan A

Michael Clarke to play in tour game against Pakistan A

Michael Clarke was declared fit for the four-day tour game against Pakistan A from October 15-18.

Australia on Monday received a huge boost when their captain Michael Clarke was declared fit for the four-day tour game against Pakistan A, ahead of their two-match Test series in the United Arab Emirates (UAE).

However, Australia are worried about the fitness of explosive David Warner, who picked a groin injury during the third One-Day International (ODI) against Pakistan, in which the tourists registered a thrilling narrow one-wicket win.

“Clarke will be fine, he’ll play the tour game. Warner, we’ll asses him in the next couple of days. If he’s not right for the tour game, he won’t play,” said Australia coach Darren Lehmann, according to Cricket Australia (CA) website.

Lehmann said the injured all-rounder Mitchell Marsh has returned to the nets and bowled as well ahead of the third ODI.

“He bowled today and yesterday, so he’s getting closer. I would hope he would bowl some overs in the tour game – I expect him to,” Lehmann said.

Talking about Australia’s next ODI assignment – at home against South Africa ahead of the ICC World Cup 2015 – Lehmann said his side will consist of the best players available.

“As a selection panel we’ll be trying to pick the best side to win in Australia against South Africa,” said Lehmann. “We just played them in Zimbabwe, in different conditions, and we’ll have to come up with a format to play them [at home]. There could be changes. Until we [the selectors] meet, we’ll wait and see.” 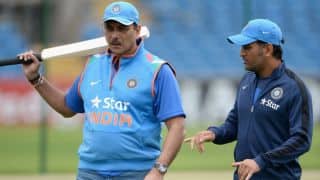 Pakistan vs Australia 2014: David Warner confident of recovering in time for 1st Test