Michael Clarke will be fit to play first Test versus India: Rod Marsh

Michael Clarke will be fit to play first Test versus India: Rod Marsh
By CricketCountry Staff

Michael Clarke is expected to be fit in time for the first Test against India at Brisbane reckons Rod Marsh; Australia’s chief of selectors.

Clarke did not return to the field after his already dodgy left hamstring worsened during the first One Day international versus South Africa at Perth according to Reuters.com. He was taken for scans following the injury but may need to have it looked up by a specialist, although considering that Clarke’s immediate response was positive Marsh said,

“I’ll back Michael Clarke in there (for the first test),” Marsh told host broadcaster Channel Nine during coverage of the second ODI against South Africa on Sunday.

“I’ve never seen a happier doctor … He looked really happy with what happened.”

The first test versus India begins on December 4 at Brisbane. 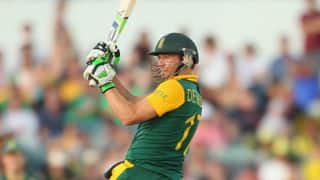