Australia cricket captain Michael Clarke said Saturday the team were in deep pain at the death of Phillip Hughes, as former skipper Ricky Ponting said it would take a miracle for them to be ready for next week’s Test.

Hughes, 25, died on Thursday from massive bleeding on the brain, two days after being knocked unconscious by a bouncer while batting at a domestic match at the Sydney Cricket Ground (SCG).

Speaking on behalf of the Australian cricket team and support staff, a visibly upset Clarke spoke of Hughes’ parents and family and said: “We share in the deep pain that you’re feeling.

“Words cannot express the loss we all feel as a team right now,” he told a brief press conference in Sydney in which he took no questions and battled to keep his composure.

“Apart from when he was home on the farm with his beloved cattle, Hughesy was at his happiest playing cricket for his country with his mates,” Clarke said.

“Things were always put into perspective when Hughesy said: ‘Where else would you rather be boys than playing cricket for your country?'”

Clarke said Hughes, who had played 26 Tests since his 2009 debut and who had appeared ready for his next call up, had epitomised what the baggy green cap that Australian Test cricketers wear was all about.

He said he had asked Cricket Australia to retire Hughes’ one-day international number of 64 which they had agreed to do.

“The world lost one of its great blokes this week and we are all poorer for it. Our promise to Hughesy’s family is that we will do everything we can to honour his memory,” Clarke said.

“His legacy of trying to improve each and every day will drive us for the rest of our lives.”

The distressing incident has cast doubt over whether the first Test match against India, scheduled to begin in Brisbane on Thursday, should go ahead.

“It’s been such a tragic week for the Hughes family and the cricket community, I can’t imagine how anybody can be expected to play Test cricket on Thursday,” Ponting wrote in The Australian newspaper.

“In fact I don’t think it would be right. Even if the boys think they can play, it would be a miracle if they find the right frame of mind needed for five days of cricket.”

Test players David Warner, Shane Watson, Brad Haddin and Nathan Lyon were at the Sydney Cricket Ground when the popular Hughes suffered the fatal injury during a Sheffield Shield match.

Cricket Australia chief executive James Sutherland said Friday the Australian team was grieving and the possibility of playing, delaying or cancelling the first Test had not yet been discussed.

“Six or seven days is not a long time, but right now with where we all are, it seems like a million miles away,” he said.

The tragic accident has deeply shaken the world cricket community and Clarke thanked fans for their touching tributes, which have included thousands of people posting pictures of cricket bats on Twitter .

“We’re going to miss that cheeky grin and that twinkle in his eye,” Clarke said.

“Our dressing room will never be the same.  We loved him and always will.” 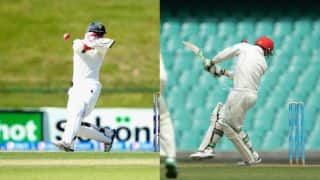 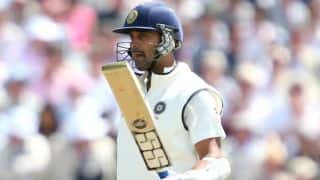 Murali Vijay in India vs Australia Test series: Will he be an integral part?