Melbourne: Australia captain Michael Clarke will quit one-day international cricket after the ICC Cricket World Cup 2015 final, bringing the curtain down on his 12-year career and adding a fresh edge to Sunday’s Melbourne showdown against New Zealand. “I think it’s the right time for me and the Australian cricket team,” the 33-year-old Clarke told reporters on Saturday. “I made the decision 48 hours ago when I asked myself if I thought I would be playing in the next World Cup and I said to myself that I don’t think I will be.” Michael Clarke to retire from ODIs following ICC Cricket World Cup 2015 final

Clarke has played 244 one-day internationals, scoring 7,907 runs with a highest score of 130. He intends to keep playing Tests having already played 108 matches with 8,432 runs and a highest score of 329 not out. Clarke’s pre-final news conference at the MCG was dominated by his decision to quit ODIs to focus on his Test career, which he described as the “pinnacle” of the sport. However, he said it was not for him to go into who should be Australia‘s next captain, although Steve Smith has been mentioned after he took over for the last three Tests against India in Clarke’s recent absence following hamstring surgery. Michael Clarke denies fitness fear rumors ahead of ICC Cricket World Cup 2015 final

Meanwhile, New Zealand captain Brendon McCullum struck the first psychological blow when he named his team 24 hours before the final. Unsurprisingly, the Black Caps retained the same side which edged out South Africa in the semi-finals. “It’s captivated the country back home, it’s immensely satisfying but we have to build on it. Gee it would be nice to win it,” said McCullum at his pre-match news conference. McCullum’s men go into their first title clash in cricket’s 50-overs-a-side showpiece as the only unbeaten team in the tournament, having won eight games in a row. Michael Clarke retires from ODIs: Twitter Reactions

One of those wins was against Australia in a low-scoring pool stage thriller in Auckland on February 28 when a Kane Williamson six off Pat Cummins helped them surpass a modest target of 152 with one wicket standing. It was at the same Eden Park in Auckland that the Black Caps downed South Africa in a nerve-tingling semi-final on Tuesday with a penultimate-ball six by Grant Elliott.

New Zealand’s first semi-final win in seven attempts left an enthralled rugby-mad nation backing their cricketers to take home a trophy that has so far eluded them in the World Cup’s 40-year history. Australia, the top-ranked side in ODI cricket, are bidding for a fifth World Cup title and will be favourites on home turf at the MCG, where New Zealand last played an ODI in 2009. Clarke said the Black Caps may struggle to adjust to conditions at the MCG after playing all their eight previous matches this tournament on their own grounds across the Tasman Sea.

“Conditions are a lot different to what New Zealand have been playing in New Zealand,” Clarke said after his team’s emphatic 95-run semi-final victory over defending champions India in Sydney on Thursday. “But we will have to play our best cricket to win. New Zealand have been the form team of the competition and they certainly deserve to be in the final.” Four Kiwis — batsmen Williamson and Corey Anderson and fast bowlers Trent Boult and Matt Henry — will be playing at the MCG for the first time. But New Zealand should have no problem adjusting to the vast 90,000-capacity amphitheater, where they have defeated Australia in three of their last five ODIs. ICC Cricket World Cup 2015 final, Australia vs New Zealand: Match facts

In their last appearance six years ago, it was semi-final star Elliott’s unbeaten 61 that fashioned a six-wicket win with seven balls to spare after Australia had been restricted to 225 for five from 50 overs. Opener Martin Guptill, who hit a World Cup record score of 237 not out against the West Indies, is just 10 runs away from surpassing Sri Lanka star Kumar Sangakkara’s tally of 541 to become the tournament’s leading run-getter. Left-armer Boult is the leading bowler in this edition with 21 wickets, one more than Aussie paceman Mitchell Starc, while seamer Tim Southee and veteran spinner Daniel Vettori have 15 wickets each. The 36-year-old Vettori is likely to end his international career after Sunday’s final. Read: Australia and New Zealand prepare for ICC Cricket World Cup 2015 final at Melbourne 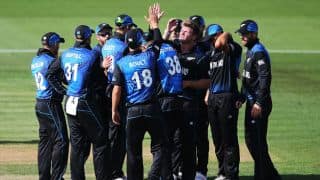