Michael Clarke will retire from international cricket after the fifth Ashes Test against England.

London: Australia‘s Michael Clarke will retire from international cricket after the fifth Ashes Test against England, starting on Thursday, with a brilliant record but strangely lacking the universal praise his figures might suggest. Only three Australia have scored more runs than Clarke — who has battled a chronic back condition throughout his career — and the outgoing captain is also the only Australian to score a hundred on both his home and away Test debuts. Yet Clarke won’t bow out with the kind of unstinting admiration his career would appear to deserve. Clarke, nicknamed “Pup”, burst on the scene with a diamond studded ear-ring and highlights in his hair. Read: Michael Clarke lived by the sword and died by it

Clarke soon became something of a lightning rod for Australians unhappy with aspects of modern Australia — and they were soon able to express their displeasure in that most modern of ways on social media, where Clarke’s relationships with former girlfriend Lara Bingle and now wife Kyly, both one-time models, were laid bare — often by Clarke himself.  “Michael was more your 21st century captain, he was single, he was flashier, lived a different life to some of us in the past, but that doesn’t make him a bad person, nor a bad captain,” former Australia skipper Mark Taylor told ESPNCricinfo when asked about Clarke.

But former Australia coach John Buchanan, in charge of the side for the first four years of Clarke’s international career, said the “baggy green culture” so highly prized when he was making his way in the side had “disappeared a bit” under the now 34-year-old’s captaincy. Read: John Buchanan latest to criticise Michael Clarke’s captaincy

Clarke confirmed he would retire immediately after England’s innings and 78-run win in the fourth Test at Trent Bridge earlier this month gave them an unbeatable 3-1 lead in the five-match Ashes series. The timing of Clarke’s announcement led to accusations that he had tried to make what should have been England’s day “all about him”, a criticism that was aired when he confirmed he would be quitting one-day internationals on the eve of Australia’s ICC Cricket World Cup 2015 final triumph against New Zealand earlier this year.

Meanwhile, the fact that some people in and around the Australia team are vitriolic when talking about Clarke can’t be ascribed solely to jealousy. After his debut hundred in Bangalore in 2004, which he completed wearing his baggy green Australia cap rather than his helmet, Clarke like many a young player before him saw his form dip. He was soon facing the charge that he didn’t make “tough runs” and was also a “pet” of his friend, colourful spin-bowling great Shane Warne. Read: Poll: Do you think Michael Clarke is right in retiring after Ashes 2015?

But starting with a superb innings of 329 not out against India in his native Sydney, the year 2012 marked a golden time for Clarke — who found himself in charge of an Australia side shorn of several great players including Glenn McGrath and Warne. It eventually led the Sydney Morning Herald to say sorry to Clarke for comments about his lifestyle but, as cricket writer Jarrod Kimber observed: “To get a public apology all Michael Clarke had to do was score 329 not out, 210, 259 not out and 230 in one year”. Read: Photo: Shane Warne congratulates Michael Clarke on a fantastic Test career

But a 4-0 series loss in India led to charges that Clarke had been complicit in players being dropped for failing to write written reports about their performance — although the blame for “homework-gate” fell mainly on the then coach Mickey Arthur.

Clarke’s popularity was boosted by Australia’s 5-0 Ashes thrashing of England in 2013/14, while his magnificent 161 at Cape Town in a series-clinching win away to South Africa in March last year, after suffering a broken arm, was a superb example of making “tough runs”. Read: Virat Kohli congratulates Michael Clarke on an excellent Test career

Off the field, he would win plaudits later in 2014 for the way he conducted himself after Australia batsman Phillip Hughes died after being hit on the head by a bouncer in a state match and for the moving eulogy he gave at his friend’s funeral. The hundred he made against India in Adelaide after Hughes’s funeral was a memorable innings in the circumstances. But with runs slipping away from Clarke, who has reached 25 just six times in his last 30 Test innings, the old charges against him soon resurfaced. 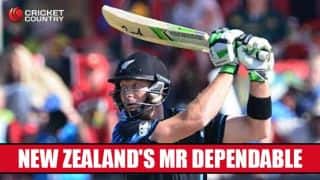