Michael Hodling believes fast-bowling dying due to overdose of cricket

Michael Hodling believes fast-bowling dying due to overdose of cricket

Holding said he was bored and disappointed with the World Cup.

Shanghai: West Indian legend Michael Holding has has been impressed with the growth of fast bowling in India but rued the decline of the art in world cricket due to an overkill of the game.

“I was very impressed with Indian fast bowlers, especially Mohit Sharma and Mohammed Shami. It was surprising to me. I think what has contributed to India’s fast bowling is the changing of the nature of pitches in India. They have now better pitches, bouncy pitches and it is encouraging bowlers and it helped their batsmen to handle bouncers as well,” Holding told PTI at the sidelines of the Laureus World Sports Awards, here today.

“Last October I visited India and was pleasantly surprised by the sporting bouncy pitches. I would have begged on my knees for such pitches in 1983,” he added.

The man who was known as whispering death, said fast bowling is dying because of excessive cricket.

“In World Cup any bowler would have disappeared, especially in the last 10 overs with smaller boundaries and bigger bats and fielding restrictions. What is killing fast bowlers is the amount of cricket that is being played. It is difficult to maintain your fitness, speed and skill,” he said.

Talking about India’s performance at the World Cup, Holding said: “I think most teams were at a disadvantage batting second. The amount of runs India were chasing, I said to myself no chance. If India would have batted first then they could have scored 300 plus. ”

Holding said he was bored and disappointed with the World Cup.

“There was too many one-sided games in World Cup. Too many sides batted first and batted out the opposition. Teams batting second were not competitive. I found that aspect of the game boring. Many a times I slept over during the second innings,” he said.

“I would love to see a shorter World Cup, which doesn’t necessarily mean lesser teams, and more competitive cricket with proper size bats.”

Talking about the format of next World Cup, he said: “If ICC has 10 teams then 10 months ahead of the tournament they should have top six teams qualify for the main draw, while the rest four should face a play-off. I don’t want the Test playing nations qualifying automatically.” 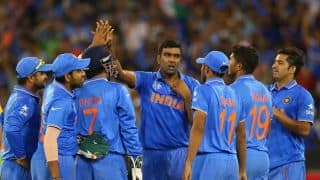