Not a big fan of the T20s, Holding said it's time to stop making the game shorter and shorter.

Fast bowling great Michael Holding feels that ODI cricket is here to stay despite the many concerns being raised about its loss of relevance as the format remains financially lucrative for the ICC. In the past, stalwarts of the game like Ricky Ponting and Rahul Dravid have feared ODIs losing context with the rapid growth of T20 cricket and Tests remaining the ultimate challenge for a cricketer.

However, Holding feels the 50-over game is going nowhere. “I don’t think ICC will ever get rid of 50 overs cricket because that’s one of their biggest earners as far as TV rights is concerned. The money will be slashed drastically,” said Holding said in ‘Instagram live with Nikhil Naz’.

Not a big fan of the T20s, Holding said it’s time to stop making the game shorter and shorter. “In T20, they enjoy the razzmatazz of the excitement. Long before you had your first 10-10 game, you would see people getting bored with T20. And I still see at some point people will get to five-five.”

“People with short attention span will get attracted to that. But it is my belief you should not always cater to people’s short attention. You can’t just keep on getting shorter and shorter. We can’t keep on going in that direction, then you are left with nothing,” he said.

The pacer-turned-commentator further said ICC’s Cricket Committee recommendation to ban saliva to shine balls would not pose any “practical” problems.

“I don’t think this saliva ban is a serious problem. The problem with this ban is that the cricketers will take sometime to adjust. It’s a natural reaction when you are on the field and you want to shine the ball, you use saliva.”

The 66-year-old felt that sweat can do the role of shining the ball as effectively as saliva.

“All you need to do is to get moisture on the ball and you can get that from your sweat. You don’t have to use the usual saliva. The perspiration from your arm or your forehead will do the same job as saliva. And I’ve not heard anyone say that COVID-19 can be spread by perspiration.

Kumble had said that cricket should utilise pitches to ensure an even contest between the bat and ball but Holding disagreed with that view.

“I don’t believe in interfering with pitches. Some groundsmen might not be good enough to do exactly what is required and then the match gets spoiled. So, I will just leave the pitch and try to coach players to stop putting their fingers in their mouth,” said Holding.

A fan of Bob Marley, Holding was asked to describe Indian skipper Virat Kohli through one song of the legendary Jamaican reggae artist.

“Buffallo Soldier,” he said before picking Kohli ahead of Rohit Sharma as the “best white-ball cricketer” of the current generation.

He also added that the Indian cricket board (BCCI) has every right to hold the IPL later this year if the Twenty20 World Cup in Australia is postponed.

There is speculation that the T20 World Cup, scheduled to be held between October 18 and November 15, may be postponed due to travel restrictions in place in the wake of COVID-19 pandemic, giving BCCI a window to organise the IPL. 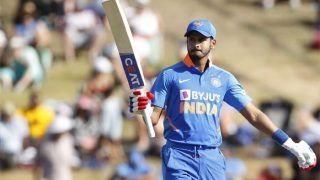 Salim Malik Calls PCB's Questionnaire a Script of Lies, Says Allegations on His Integrity Are False