The moment Holding cleaned-up Greig, a horde of jubilant West Indian fans ran into the ground and celebrated.

Before the series, England skipper Tony Greig infamously said, “We will make the West Indies grovel.” It hurt West Indies team so much that to make Greig eat his words, his words became the motivation.

It was also the series when West Indies skipper Clive Lloyd changed the way Test cricket was played. He unleashed a group of bowlers who were capable of running through the sides singlehandedly. Since then, for almost the next two decades, they had the plethora of creating deadly fast bowlers, who had the potential of grabbing the headlines next day and won West Indies high laurels.

One such deadly bowler was Michael Holding, who currently is a popular commentator. In 1976, West Indies toured England in middle of social disharmony and there were tensions all around, what didn’t help further was Greig’s comments. West Indies were leading the series 2-0, but that didn’t suffice their hunger.

In the fifth Test at the Oval, West Indies won the toss and chose to bat. They piled 687 on the board with Viv Richards clobbering the English bowlers at will. He scored 291, which remained his highest Test score. When the English batsmen came to bat, they found the pace of Holding too difficult to deal with.

It was a dusty and docile track, suited for batting. While Dennis Amiss played a brilliant knock of 203, other batsmen found it difficult to counter the Jamaican. Holding, who was 22 then and in his first year of cricket, picked up eight for 92 from 33 overs. Out of his eight victims, six were bowled and two leg befores.

Amiss later recalled, Denis Amiss recalls, “Before he (Greig) came in they were bowling at a nice pace of about 85 mph, but when Tony came to the wicket it went up to about 90 and three bouncers and over. I’ve never been as pleased to see an England captain bowled.”

The moment Holding cleaned-up Greig, a horde of jubilant West Indian fans ran into the ground and celebrated.

Umpire Dickie Bird, who was officiating in that Test, christened Holding ‘Whispering Death’. Bird was famously quoted as saying, “I couldn’t hear him when he was running in. It was the most fantastic piece of fast bowling I had ever seen.” the legendary umpire once said.

West Indies in their second innings tore English bowlers and gave England the target of 435 runs. The Holding wreckage from first innings continued. He first picked up the openers – Amiss and Woolmer, then knocked out Chris Balderstone. His next preys were Greig and Alan Knott, and later picked up the last wicket of Bob Willis. He finished with six for 57 in the second innings.

Holding ended this match with 14 wickets. His bowled at lethal pace and many years later Woolmer said that Holding was the fastest bowler he had ever faced. West Indies continued their dominance as they won the final Test by 231 runs to seal the series 3-0.

Speaking of this devastating spell, the man himself, Holding, many years later said, “I was 22 years old and just ran in and bowled. I didn’t even think about the conditions – you don’t at that age. I tried to bowl as accurately as possible because there was no way I could bowl a bouncer. I was getting good inswing and I kept the ball full. It was my best Test as far as figures are concerned, but I bowled better than that in different circumstances. At The Oval it was simple: bowl fast and bowl full.” 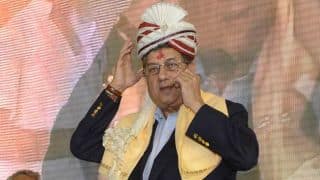 N Srinivasan to receive BJP support for Board elections