Australia will be taking on New Zealand at the SCG in the first match of the tri-series on Saturday.

Australia will be taking on New Zealand at the SCG in the first match of the tri-series on Saturday. Australia will be missing out on the services of Steven Smith, Nathan Lyon, Josh Hazlewood, Mitchell Starc and likes. However, their batting line-up does possess of explosive batsmen like Aaron Finch, D arcy Short, Glenn Maxwell, Marcus Stoinis and Chris Lynn. Ahead of the tri-series, Michael Hussey picked the danger players who could pose a threat in the series.

From Australia, Hussey was caught between David Warner and Chris Lynn. Warner had an unpleasant outing in the ODI series against England. He could manage a total of 77 runs from 5 matches at 14.60. Yet, Hussey has placed his bets on Warner:

He’ll be stung a little bit having had a disappointing one-day series, but he’ll also be so excited about being captain of the team. I know he loves leading teams; he’s led the Sunrisers Hyderabad in the IPL and done a fantastic job there. And he’s someone who really thrives on the leadership and leads from the front. I wouldn’t be surprised if he’s someone that has a very good series for Australia, Hussey told Unplayable Podcast.

As for New Zealand, Hussey was caught between Colin de Grandhomme and Martin Guptill. De Grandhomme smashed 40-ball 74 in the fourth ODI against Pakistan. He also holds a whopping 153.73 strike rate in T20Is. Guptill, on the other hand, became the second batsman in the world, after Brendon McCullum, to score 2,000-plus T20I runs.

However, Hussey opted for de Grandhomme: He is an aggressive and clean hitter of the cricket ball. He doesn t hold back against the spinners, he’s happy to take them on and belt them over the fielders even if they re fielding on the boundary. I watched him closely in a couple of games against Pakistan where he just destroyed them. He s someone, given the right conditions and the right type of bowling, he could be very, very dangerous.

England have a formidable unit. They clinched the ODI series by 4-1 against Australia after a dismal 2017-18 Ashes show. Hussey ignored the top guns and went for leggie Adil Rashid. He was the leading wicket-taker in the ODI series against Australia scalping 10 wickets from 5 matches at 29.90. Rashid was also the leading wicket-taker for Adelaide Strikers with 16 wickets from 9 matches in 2015-16 BBL.

It’s shown in T20 cricket, leg-spinners in the Big Bash have done so well, as long as you re a good one and there s been some very good ones on show. They just have this knack of taking wickets and I think Rashid would have got a lot of confidence from the one-day series against Australia. He played well for the Adelaide Strikers in the Big Bash a couple of years ago and is a key member of the England team, Hussey concluded. 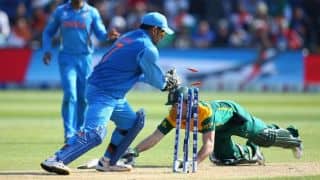