Mumbai are 24 for no loss after three overs in IPL 7.

Delhi Daredevils won the toss and elected to bowl against Mumbai Indians in game No 51 of Indian Premier League (IPL) 2014. The deck at Wankhede stadium is expected to be flat and should favour the batsmen. There was a bit drama before the game started, as  Praveen got injured and it meant that after some discussions, Praveen was replaced by  the slow left-arm orthodox, Pragyan Ojha.

Wayne Parnell opened the bowling for Delhi. He straightaway looked to bowl full and found a wee bit of swing. Lendl Simmons who has been in prime form for Mumbai Indians opened the batting with Michael Hussey. Hussey was the opened who opened his shoulders by essaying a fine shot through the covers for a boundary. 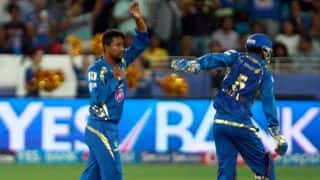