This was the latest in a long line of inept Test displays outside the Caribbean by the reigning World T20 champions.

It says something when an ex-England captain in Michael Vaughan voices “fears” for the state of West Indies cricket. But the fact such comments have been made for the best part of two decades, and not solely after the West Indies’ innings and 209-run defeat by England in the first Test at Edgbaston tells its own story. Britain’s inaugural day-night Test was already a landmark clash. It became so in another way as the West Indies lost 19 wickets on Saturday, with England cruising to victory inside three days. England piled up 514 for eight declared on the back of Alastair Cook’s 243 and captain Joe Root’s 136 before the West Indies were shot out for 168 and then 137 after following-on.

At one point Stuart Law, the West Indies’ coach, had his head in his hands and it was easy to sympathise with the Australian’s despair as his side made several ‘schoolboy errors’. This was the latest in a long line of inept Test displays outside the Caribbean by the reigning World Twenty20 champions.

The West Indies, who dominated the long format in the 1970s and 1980s, last won a Test in England 17 years ago. And since 1997, excluding matches against perennial strugglers Bangladesh and Zimbabwe, they have won just three out of 87 away Tests in total. “Every time they have arrived in England, they seem to have got worse,” Vaughan told the BBC’s Test Match Special. West Indies’ plight has not been helped by players being barred from Test selection unless they appeared in the entire domestic four-day competition. But star names faced with a choice between a lowly-paid tournament – the economics of many West Indies territories mean officials cannot match the wages on offer elsewhere in the world – or a clashing but lucrative Twenty20 league, simply took the better deal.

Add in a bitter dispute between several leading players and Cricket West Indies (CWI) president Whycliffe ‘Dave’ Cameron and you have a situation where Jason Holder’s Test squad are without the likes of Chris Gayle, Dwayne Bravo and Darren Sammy. Meanwhile, the privately run Caribbean Premier League Twenty20 tournament is continuing at home while a three-Test tour of England is in progress. In the absence of ‘Test windows’, where there are no competing formats running at the same time, top West Indies cricketers will most likely continue to sign contracts that offer them the greatest chance of financial security.

“I find it difficult to think they can go on without any senior players,” said Vaughan. “I really fear that this series could be one of the saddest for Test cricket.” The current West Indies side also face the problem of constant and unfavourable comparisons to their ‘golden era’ teams, especially in England where the likes of Clive Lloyd (Lancashire), Gordon Greenidge and Malcolm Marshall (Hampshire) and Vivian Richards and Joel Garner (Somerset) all starred in county cricket as well.

An “amnesty” means the hardline selection policy is set to be relaxed for the subsequent one-day series against England. The West Indies have problems in the 50-over format too. They failed to make this year’s Champions Trophy and the twice former champions will also have to qualify for the 2019 World Cup in England after sliding too far down the rankings for direct entry. England coach Trevor Bayliss suggested the West Indies’ woes were just part of the cyclical nature of international cricket. “West Indies are going through a rough time but 20, 40, 60 years ago there were other teams that were going through rough periods,” the Australian said. But Johnny Grave, the English chief executive of CWI, who was among the crowd at Edgbaston, insisted he was not relying on a change of luck to spark a revival. “They are a better side than they have shown and that’s the disappointing thing,” Grave, who took charge in February, told the Sunday Times.

“But one of the biggest misconceptions of Caribbean cricket is that nobody cares. “The talent is there we just won the Under-19 World Cup. We’ve now got to create a system that makes our 18-year-olds as good as England’s, India’s and Australia’s when they get to 23 or 24,” added Grave, who previously worked at county side Surrey and England’s Professional Cricketers’ Association. “We need the players on side and we need to work with them. They’re the product and they’re the future,” he said. 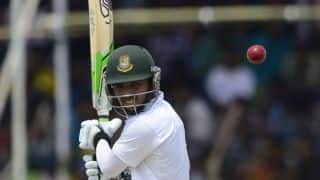