When Hardik Pandya was named Gujarat Titans (GT) skipper for IPL 2022, not many would have expected him to lead the team to the title, especially considering the fact that he had no prior experience of leadership. However, Hardik Pandya showed great maturity and led from the front to take the team to glory. The all-rounder was spot on with his tactics and gave a glimpse of his immense potential as a leader. His performance as an all-rounder was also top-notch throughout the season. Hardik scored 487 runs in the tournament, in addition to his eight wickets.

Meanwhile, former England captain Michael Vaughan was in awe of Hardik’s leadership skills and said that the all-rounder can be an apt successor to Rohit Sharma, who recently took over the India leadership reins from Virat Kohli.

“Fantastic achievement for a new franchise. If India need a captain in a couple of years I wouldn’t look past @hardikpandya7. Well done Gujarat. #IPL2022,” Vaughan tweeted.

Fantastic achievement for a new franchise If India need a captain in a couple of years I wouldn’t look past @hardikpandya7 Well done Gujurat .. #IPL2022

Rohit (35) may not be around for too long thus BCCI will be keen on shortlisting candidates who can lead India in future. KL Rahul has led India in the absence of Rohit Sharma and he is the prime candidate to take over. However, Hardik’s blitz in the IPL has certainly got him into the reckoning.

Meanwhile, after two months of action-packed IPL, the focus shifts to international cricket. India’s next assignment will be against South Africa in a five-match T20I series. The likes of Rohit Sharma, Virat Kohli, Jasprit Bumrah, and Mohammed Shami have been rested from the series, with KL Rahul set to lead the team. 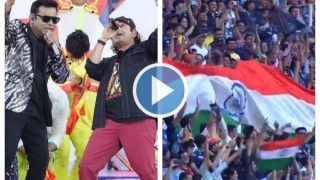