Mickey Arthur said Pakistan had been given a wake-up call for their tours of New Zealand and Australia after they became the West Indies' first Test victims in 18 months.

Sharjah: Pakistan coach Mickey Arthur said his team had been given a wake-up call for their tours of New Zealand and Australia after they became the West Indies‘ first Test victims in 18 months. Pakistan had already clinched the series by winning the first two Tests, but Kraigg Brathwaite’s heroics earned a much-needed consolation victory for the West Indies. “It is a wake-up call,” Arthur told AFP. “Hopefully that gives the shock to the players they needed before our tough tours to New Zealand and Australia.” West Indies won the third and final Test by five wickets in Sharjah on Thursday after they dismissed Pakistan for below-par totals of 282 and 208. FULL CRICKET SCORECARD: Pakistan vs West Indies, 3rd Test at Sharjah

Brathwaite guided his team to their first victory in 14 Tests as he became the first opener in Test history to carry his bat in both innings, compiling unbeaten scores of 142 and 60. Pakistan will now play two Tests in New Zealand, the first in Christchurch starting from November 17 and the second in Hamilton from November 25. Pakistan then move on to Australia for a three-Test series, starting with a day-night match in Brisbane from December 15. “It’s a good wake-up call and just says that if you’re off your discipline in international cricket at any time you can be beaten,” said Arthur, who took over in May.

“We certainly took the pedal off the accelerator in this game and were below in standards and intensity,” he added. Arthur also warned Pakistan could expect a tough tour, starting with New Zealand who will look to hit back hard after being routed 3-0 in India in October. “Any team in their conditions is extremely hard to play,” said Arthur. “If you look around the international cricket at the moment there is no easy bait in their own conditions so it’s going to be five tough matches for us.” 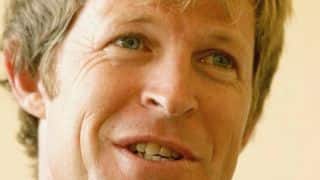 Jonty Rhodes: It's going to be tough for England in India