Pakistan head coach Mickey Arthur has considered the inclusion of spinner Todd Astle as an `interesting choice` by New Zealand for the upcoming two-Test series.

Karachi: Heaping praise on New Zealand selectors for making some ‘big decisions’, Pakistan head coach Mickey Arthur has considered the inclusion of spinner Todd Astle as an `interesting choice` by the hosts for the upcoming two-match series commencing November 17 at the Hagley Oval. Intrigued by Astle s selection in New Zealand Test squad, Arthur emphasized that the former s figures certainly make him an attacking spinner against Pakistan. It will be interesting to see how Astle goes. I was actually looking at his numbers and doing a bit of analysis and his numbers seem fairly good, I mean he s certainly an attacking spinner, Arthur was quoted as saying by the Express Tribune. FULL CRICKET SCORECARD: Pakistan vs New Zealand, 1st Test at Christchurch

I guess if New Zealand are not going to play four pacers in Christchurch, then he s [Astle] definitely playing which is an interesting selection, he added. Astle, who played his only Test match four years ago, replaced injured left-armer Mitchell Santner as the team s only specialist spinner, while uncapped batsman Jeet Raval and all-rounder Colin de Grandhomme were also brought in the squad to face the Misbah-ul-Haq-led side. Raval, who was in the squad for New Zealand’s Test tours of Zimbabwe and South Africa earlier in 2016, will come in place of Martin Guptill at the top of the order. Pakistan vs New Zealand: Sundaram Ravi to officiate Test series

Reflecting on Guptill s axing, Arthur said that he completely understands what New Zealand selectors are up to and, therefore, respects their decision. They [New Zealand s selectors] seem to have made some fairly big decisions, particularly on Guptill. Guptill is a guy who can take it away from you, but his numbers obviously haven t stacked up. Ultimately though, I ve got a lot of respect for the selectors and they know exactly what they re up to, he said.

Arthur, however, maintained that both sides possess really good bowling attacks in all departments. Pakistan are currently in Nelson for their three-day tour match against New Zealand A, with the first day of the game being washed out due to rain. 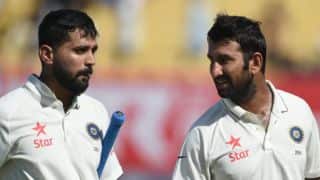