Police launched a probe following Sourav Ganguly's complaint that a threat letter was delivered to his residence on January 7.

Midnapore: A middle-aged man was on Friday arrested on charge of sending ‘threat letter’ to former India skipper Sourav Ganguly in West Midnapore district. Nirmalya Samanta was arrested on Friday after police launched a probe following Ganguly’s complaint that a threat letter was delivered to his residence on January 7 asking him not to attend a programme of Vidyasagar University on January 19 in Midnapore, a senior district police officer said. Addressed to Ganguly’s mother, the anonymous letter stated, “Your son is hereby warned not to attend the programme. If he ignores the warning and comes here, you will not see his face again.”

Ganguly had filed a complaint with Kolkata Police which passed on the information to their Midnapore counterparts. The officer said based on claims by Nirmalya that he was instigated by some people at a tea stall on January 5 to shot off the letter to Ganguly, police would question the stall owners and try to ascertain if the arrested man and his acquaintances were present at the place on that day. Ganguly is currently the President of Cricket Association of Bengal (CAB). The letter says that if Ganguly keeps any contact with Ashish Chakraborty, he will be killed. Chakraborty represents CAB at the district level.

The letter says that Chakraborty has done fraud in Midnapore, and hence the threat. Sourav later told xtratime.in, I was supposed to travel to Midnapore for a district sports programme at the Bidyasagar University on January 19. I have been told not to travel there because of security reasons. I have intimated the whole incident to the police authorities. They are taking all the adequate steps. Ganguly, for that matter, was referred to as Maharaj in the letter, for he was nicknamed so in his childhood. 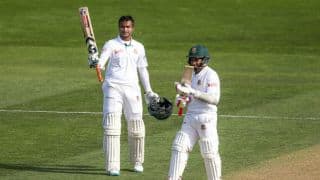