"Virat Kohli has given the team pride and aggression" - Mike Brearley.

Mumbai: England‘s Mike Brearley heaped praise on Virat Kohli, saying the India captain has given the team a sense of pride and aggression.”I have not been close enough to (Virat) Kohli but I admire him enormously. He has given the team pride and aggression. He is always attentive, keen eyed, he is a wonderful batsman and he is shrewd,” Brearley said at an event after his book ‘ON FORM’ was released. Kohli has often faced criticism for changing playing XIs in Test matches, but Brearley backed him, saying it was “extraordinary”.

“I find it extraordinary and probably because it has to do with some unsettling in the team when you have too many changes. Of course, it could be too gratifying to the team or too complacent to the team to have changes. Just because you won the last Test does not mean you have to play the same team, you should change. May be what has come in with T20 cricket is greater openness to variability. You have to come and bowl one over and then you’re taken off. You have to be very flexible and quick to adjust,” 75-year-old Brearley said.

The book was released by Dilip Vengsarkar in the presence of Madhav Apte. After winning several home series in the last couple of years, Kohli lost his first Test series as a skipper when India were defeated 1-2 by South Africa in South Africa. After being 0-2 down, India beat South Africa in the third and final Test in Johannesburg on a treacherous wicket in the recently concluded series. Kohli, who is one of the best batsmen in world cricket today, did not have decent scores when India toured England in 2014 and he struggled to play deliveries outside the off stump, but Brearley said the India skipper was up against some good bowlers in conditions that suited them.

“I did not watch it closely enough. If you’re batting in English conditions and you have got (James) Anderson and (Stuart) Broad bowling against you, you are going to get out sometimes. They are going to get out the best players and they are going to make the best players look modest for a while. But he (Kohli) came through. He is now scoring runs everywhere. He was up against top quality bowlers in conditions that suited them,” Brearley said, adding that he now likes the brashness shown by Kohli.

Brearley was outspoken when it came to home sides preparing wickets to suit them, saying he did not like the idea. Asked whether he has any tips for the Indian team, who will tour England later this year, the former right-handed batsman said, “They will find it hard. It’s a drawback of international cricket today that there are too many home wins. “I don’t like the idea of people making pitches too much in favour of their own bowlers. Of course, you have pitches that are natural to their country, say you are going to have turning pitches in India or seaming pitches in England, but it sometimes goes too far.”

“India have got a very good team. I was impressed with how they stuck at it in the last innings in Johannesburg in the field and their batting on difficult pitches was against good quality bowling,” Brearley signed off. 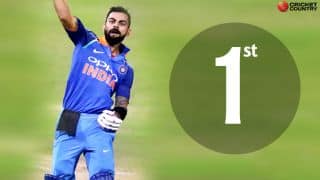