The Black Caps thrashed England by 199 runs in the second Test at Headingley on Tuesday.

Leeds: New Zealand coach Mike Hesson said he was delighted by the way in which his side had “stuck to their guns” after coming from behind to draw a Test series with England.

The Black Caps thrashed England by 199 runs in the second Test at Headingley on Tuesday, just over a week after they lost the first of this two-match series by 124 runs at Lord’s. Alastair Cook goes past Sachin Tendulkar

The victory, only their fifth in 54 Tests in England, saw New Zealand end level at 1-1 and meant they had now been unbeaten in seven successive Test series. Both their innings in the second Test saw New Zealand make shaky starts.

They were two for two in their first innings and 23 for two in their second, but New Zealand continued to attack England’s bowlers and recovered to post totals of 350 and 454 for eight declared respectively. New Zealand media showers praise on cricket team post 199-run win vs England

“It is challenging because obviously if it doesn’t work out, you can get exposed,” Hesson told AFP at New Zealand’s hotel on Wednesday.

“We were under pressure a lot of the time and on most occasions we took a step forward. Two for two and two for 23, you are under the pump and you can go into your shell but we didn’t do that. We stuck to the way we want to play and in a short space of time we got the initiative back,” Hesson said. England can regain The Ashes despite series draw against New Zealand, says Alastair Cook

Hesson, who oversaw co-hosts New Zealand’s run to this year’s World Cup final, was particularly pleased at chalking up an away victory.

“It’s seven Test series in a row without defeat. That’s something we are immensely proud of as a group.” Brendon McCullum: New Zealand cannot eclipse rugby team despite massive win

“We are challenging good sides in their own home conditions. It’s another thing to win away from home. That’s what makes this Test victory so special.”

New Zealand now face England in a five-match one-day international series, starting with the first ODI at Edgbaston on June 9.

During their run to the World Cup final, where they lost to fellow co-hosts Australia, the Black Caps hammered England by eight wickets in Wellington.

Tim Southee took a stunning seven for three as England, who crashed out of the tournament without beating a Test nation, were skittled out for just 123.

New Zealand then pulverised England’s attack, skipper Brendon McCullum striking 77 off just 25 balls, a they raced to victory in a mere 12.2 overs.

“It’s different conditions, a different tournament. But we certainly played well that day. That’s the way we want to play. Hopefully conditions allow that but if not, we’ve got to try to skin the cat a little differently,” said Hesson.

England, in a bid to build a new one-day side and also to give some senior players a rest before the Ashes, have dropped James Anderson, Stuart Broad and Ian Bell from their squad for the one-day series with New Zealand.

Now the likes of aggressive Surrey batsman Jason Roy and Northamptonshire all-rounder David Willey will be looking to impress against New Zealand.

“I think it’s an exciting squad. Some of the players have been left out I guess on form, others to rest for the Ashes,” said Hesson.

“But it’s an exciting side, a dangerous side. In areas it’s inexperienced, but sometimes that’s a tough area to scout. We’ve got plenty of work to do between now and the start to familiarise ourselves with a few unfamiliar faces.” 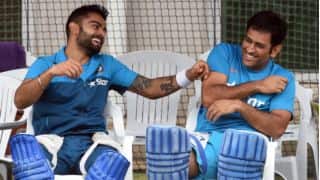 Virat Kohli: MS Dhoni is the most successful Indian captain ever 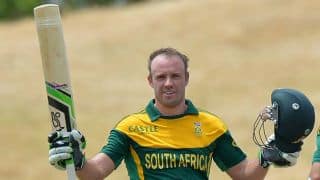