Anderson hit a six and a four off Raina's over as MI scored 13 runs off the over and looked to be on the attack.

R Ashwin bowled the 11th over of the match and went for just four runs. Suresh Raina came on to bowl the 12th over, and was immediately attacked by Corey Anderson. Anderson hit a six and a four as MI scored 13 runs off the over and looked to be on the attack.

Ravindra Jadeja, bowling the tenth over, finally brought about some success for CSK. After going for four runs off the first three balls, he had Mike Hussey clean bowled while going for a slog. New man Corey Anderson hit the final ball of the over for six to announce his arrival.

Earlier, after Mumbai Indians’ breezy start against Chennai Super Kings in Indian Premier League (IPL) 2014, MS Dhoni turned to his main strike-bowler Ravichandran Ashwin and the scoring rate immoderately reduced the scoring rate but the scoring rate was pretty good and Michael Hussey smashed a huge six over long on.

The match between Chennai Super Kings and Mumbai Indians in Indian Premier League (IPL) 2014 reached fever pitch and Hussey built on his fine form by spanking three lovely shots on either side of the wicket. First he went after Ashish Nehra and smacked a ball off his writs that reached the fence and then went on the off-side against Ishwar Pandey with a couple of fine drives that got the score above the six run mark. Mumbai were playing it cautiously and were not going for anything risky like they did in their epic tie.

Michael Hussey continued to build on from the good work that he has built in the latter stages of the IPL and slashed a boundary over third man. Then the man in form Lendl Simmons smashed a lovely shot over mid-off and then cracked a stunning stroke over deep-mid wicket for the first six of the match. 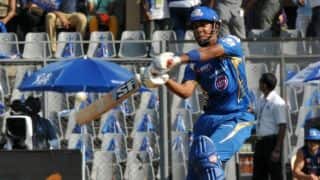 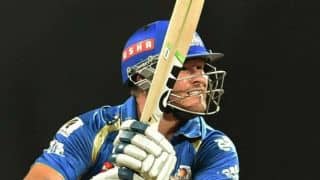