Milkha Singh was the first to score a century in the Duleep Trophy when he struck 151 for South Zone in 1961-62.

India‘s well-known Test cricketer AG Milkha Singh passed away on Friday after a cardiac arrest at a hospital in Chennai. He was 75 years old. Milkha Singh has a wife and two children. Milkha Singh was a fine batsman and fielder. He made his Ranji Trophy debut at the age of 17. He then went on to play for India at the age of 18. He had a fruitful career for Madras in the Ranji Trophy. He scored 4,324 runs in First-Class cricket that included eight centuries. As for India, he played 4 Tests with tally of 92 runs at 15.33.

He was also employed at State Bank of India (SBI). Milkha Singh was privileged to have played alongside his brother Kripal Singh against England in 1961-62. Kripal too has played for the India in 14 Tests. The family’s tradition towards cricket followed and his nephew Arjan Kripal Singh also played Ranji Trophy.

The condolences poured in from cricket fraternity. Bishan Singh Bedi was the first to take on to Twitter, “Once the most attacking left hand batsman o his times AG Milkha Singh is no more.. AG clan is diminishing..RIP Micky..Guru MEHR Kareh..!!”

Once the most attacking left hand batsman o his times AG Milkha Singh is no more.. AG clan is diminishing..RIP Micky..Guru MEHR Kareh..!!

BCCI too condoled the sad demise of Milkha Singh, a former Test player who passed away on Friday, Nov 10, 2017. 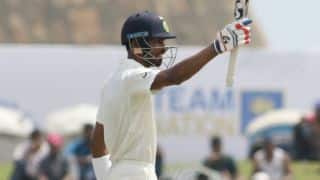