Miffed with his frequent media outbursts, the Pakistan Cricket Board on Thursday removed Shahid Afridi as captain for the two-match ODI series against Ireland but retained the flamboyant all-rounder in the squad. 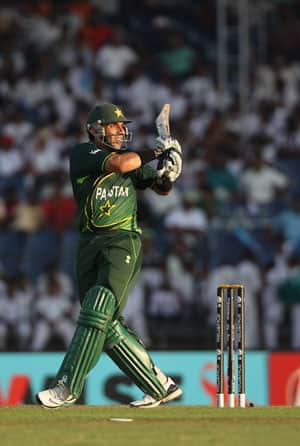 Miffed with his frequent media outbursts, the Pakistan Cricket Board on Thursday removed Shahid Afridi as captain for the two-match ODI series against Ireland but retained the flamboyant all-rounder in the squad.

PCB chief Ijaz Butt, who held a joint press conference with interior minister Rehman Malik in Islamabad, said senior batsman Misbah-ul-Haq would lead the team for the two matches against Ireland on May 28 and 30.

“Afridi has been retained in the team as a player but Misbah will captain the side,” Butt said.

The PCB had earlier this month issued a notice to Afridi for making comments on team’s affairs after returning from the West Indies.

Butt had indicated that he was not happy with the habit of Afridi to frequently give media statements on team matters and just about 24 hours back also added that the all-rounder had been given no guarantee that he will be retained captain.

Removal of Afridi has come as a shock in the cricket circles as he had successfully captained Pakistan to the World Cup semi-finals where they lost to India, followed by a 3-2 win in the One-day series against the West Indies.

The allrounder, however, on returning home from the Caribbean, had made it clear that he was not happy with the interference of people in his work, thereby making a clear indication to his dispute with head coach Waqar Younis over tour selection matters.

Afridi was not available for comments as he is presently in the United States for charity work and to look after his father, who is being treated there.

Interestingly, the board has added just two players to the One-day squad for the Ireland matches with the selectors recalling Younis Khan and Afridi. The rest of the 14 players remain the same who are playing in the ongoing Test series in the West Indies.

Younis had returned home before the first Test due to the death of his elder brother but will be available for the Ireland series, Butt said.

Misbah, meanwhile, gets the captaincy despite losing the first Test to the unfancied West Indian team.