Pakistan‘s Test and One day International captain Misbah-ul-Haq has expressed his willingness to revive his Twenty20 career, provided the Cricket Board (PCB) and national selectors want him to do so.

“I stepped away from T20 Internationals to give youngsters a chance. But I have continued to play in domestic T20 cricket and if the selectors and board want me to play T20 Internationals again I will do it,” said Misbah in a PTI report

The senior batsman also insisted that he was under no pressure while leading the Test and ODI sides despite the national team’s poor performances in recent times.”I am thankful the board reposed confidence in me again.I take captaincy as a challenge but even when we were losing in the UAE to South Africa the players were determined to come out of the bad run,” Misbah said.

“It is all a matter of getting your momentum going and we were always confident that we could bounce back in South Africa and we did that and now the team has got back its momentum,” Misbah added.

The Pakistan captain also insisted that he was keen to achieve a clean sweep in the recent ODI series over South Africa.

“But we had to make four changes for the last match. Two of these were forced changes because Muhammad Hafeez injured his finger while Junaid Khan had a hip strain,” Misbah said.

He said it was decided to rest Shahid Afridi because he had been playing non-stop for a while and had himself requested for a rest while Nasir Jamshed was dropped because of poor form.

“But I am glad that we are giving the new players more exposure and some of them are coming into their own and gaining confidence as well,” he said.

Misbah also maintained that there were no groupings or problems in the team.

“I just want to tell everyone there is nothing wrong in the team. Everyone supports each other and in recent times our batting has been our main problem and whenever it has clicked we have done well. But there are no groupings and the players support me unconditionally,” he said.

Misbah advised critics and the media to go easy on the team.

“Criticising the team after every bad performance is not a good sign and it is bad for our morale as well,” he said. 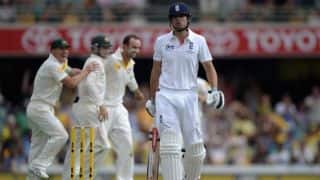