Rival captains Alastair Cook and Misbah-ul Haq on Tuesday agreed that England staged a valiant fight-back after their Test rout by Pakistan to register a clean sweep in the one-day series. 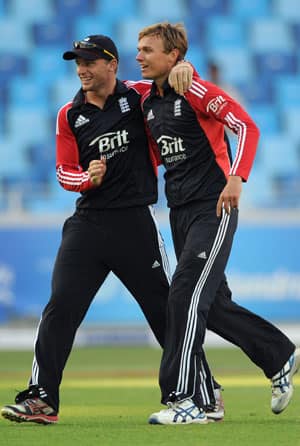 Rival captains Alastair Cook and Misbah-ul Haq on Tuesday agreed that England staged a valiant fight-back after their Test rout by Pakistan to register a clean sweep in the one-day series.

England, who lost the preceding three-Test series 3-0, came back strongly to rout Pakistan 4-0 in the one-day series, finishing with a hard-fought, four-wicket win in the final match on Tuesday.

The victory also helped England overtake Pakistan in the International Cricket Council one-day rankings, moving into fifth spot and pushing down the South Asian side to sixth.

Cook, who scored back-to-back hundreds in the first two matches, said it needed a team effort to change the fortunes.

“It’s a really good comeback. I said at the start of the series, if we’re going to turn this round we’re going to need people to stand up and be counted. A number of us have done that,” said Cook.

Cook said the win was more significant given the weather conditions.

“Pakistan had won 14 out of 15 one-dayers in a row. For us to win 4-0, in sub-continent-like conditions, is a fantastic achievement,” said Cook, whose team was thrashed 5-0 in India last year.

“What happened in India, when we lost 5-0, gave us a chance to put that to be and say, ‘this is what we need to do if we want to improve’. I couldn’t have asked any more from our team, the way we’ve responded after India defeat,” said Cook.

Pakistan scored 237 on the back of solid half-centuries from Asad Shafiq (65) and Azhar Ali (58) but were restricted in the final overs by paceman Jade Dernbach, who finished with a career-best 4-45.

Kevin Pietersen hit a career-best 130 to steer England to their first-ever whitewash over Pakistan since 1987.

“KP will take all the headlines for an amazing innings but it’s great to see Craig (Kieswetter) come in when we’re 60 for four – in a new position for him – and look as comfortable as he did,” said Cook of the wicket-keeper, who made 43.

Cook also praised paceman Steven Finn who registered identical career-best figures of 4-34 in the first two matches and finished the series with 13 wickets.

“The last 10 one-day games Finn has played, he’s been excellent,” said Cook, who will stay as cover up for the three Twenty20 internationals starting from Thursday.

For his part, Misbah said that England lifted itself in the ODIs.

“England have improved and really batted well since the Tests. They’ve started playing the spinners well and to get four centuries at the top was remarkable,” he said.

“That’s the main difference between the two teams. Pakistan dropped their performance. We also had problems with our combinations, so we have to sit down and think how to change this in the Twenty20 matches.”

The remaining two Twenty20 will be played in Dubai (February 25) and Abu Dhabi (February 27). (AFP)

It was probably the best one I've played: Kevin Pietersen