Misbah said that Bangladesh are always a tricky prospect on their own turf.

A new-look Pakistan team trail the three-match one-day series 2-0 and face the prospect of a whitewash in the final match in Dhaka on Wednesday. Misbah, who retired from one-day cricket after the World Cup last month, said fans must put up with defeats as the side rebuilds.

“If we want to give a new look to the one-day team then this defeat will have to be tolerated,” Misbah told AFP. “All the changes we have seen will have an impact on the team, with some new players coming and some making a comeback.”

Misbah, who was replaced by Azhar Ali as one-day captain, said the new team would take time to settle. “If we have decided to build the team for the future then we have to back all these new players and have to give them confidence,” said Misbah. “If we don’t panic and give this team some time it will mature within the next two years, so we must not look at the results.”

Misbah, who will lead the Test side against Bangladesh, said the hosts are always a tricky prospect on their own turf. He urged Pakistan to learn from Bangladesh’s long-term approach which has seen them largely shed their “minnow” tag — in one-day cricket at least.

“This is the same Bangladesh team which lost to Afghanistan in the Asia Cup last year and that too on their home ground, but they kept faith in their players and now they have a mature bunch of players,” he said. The two-match series will start in Khulna from April 28. “Our Test team is mature and have had good results recently, so we can take confidence from that,” said Misbah.

Misbah also backed off-spinner Ajmal, who has looked ineffective bowling with a remodelled technique on his return from an eight-month suspension imposed for an illegal action. “When a player like Ajmal comes back after such a setback he is very cautious because there are concerns over his effectiveness but I think he will improve with every match,” Misbah said. “Give him one or two series and he will come back strongly.” Ajmal, who managed just one wicket in the two matches against Bangladesh, went for 74 in 10 wicketless overs in his comeback match on Friday. England tour of West Indies 2015: Complete coverage 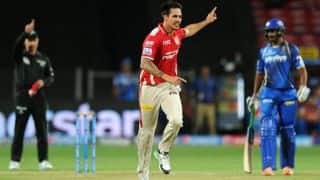 IPL 2015: Sunrisers Hyderabad vs Kolkata Knight Riders at Vishakhapatnam, pick of the tweets