Misbah-ul-Haq admitted that the decision to arrive in England early for training camp has yielded results.

Melborune: Pakistan Test captain Misbah-ul-Haq has declared that his side will look to exploit the weakness of England batting line-up when both sides will clash against each other in the first of the four-match series at Lord’s on Thursday. “England’s batting is a worrying sign for them. Of their six batsmen, three have been struggling to score runs and they have changed the No.3 position as well. That is their one weakness that we can look to exploit,” Misbah wrote in his latest column for cricket.com.au. Root has been promoted to No. 3 spot to provide stability in the batting line-up following the failure of Nick Compton, with the next two positions being filled by James Vince and the recalled Gary Balance, who have failed to click with the bat lately. FULL CRICKET SCORECARD: Pakistan vs England 2016, 1st Test at Lord s

The 42-year-old batsman also stated that absence of England pace spearhead James Anderson will be an advantage for Pakistan but cautioned his side against any sense of complacency. “No doubt England will be disadvantaged without him but this will not make us complacent. England have decent bowlers in their squad and they have the ability to cause trouble,” Misbah said. Pakistan vs England 2016, 1st Test at Lord s Preview & Predictions

Commenting on his side’s preparation, Misbah admitted that the decision to arrive in England early for training camp has yielded results and insisted that players have acclimatized themselves to the conditions well. The veteran batsman observed that Pakistan’s much-vaunted bowling attack was not just about Mohammad Aamer and warned the hosts against underestimating them. READ: Misbah-ul-Haq urges Pakistan batsmen to step up against England

“It is not just Aamer who has made our attack a force to be reckoned with, the others have been equally important and England would do well not to underestimate them. Rahat Ali was really impressive in the warm-up game and so was Yasir Shah, taking four wickets. Imran Khan and Sohail Khan have done well and Wahab Riaz is as lethal as ever,” he added. 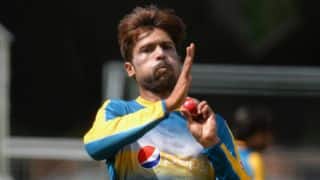