Misbah said that Pakistan side will not only miss a great player like Younis but also as a mentor.

Misbah-ul-Haq, who is playing his final Test series in the Caribbean against West Indies, has been the back bone of Pakistan side in this decade. It has been a rollercoaster ride for Misbah throughout his international career, be it as a player or later as captain. Initially, he struggled to secure his place in the national side and when he had established himself as an almost indispensible part of team, Misbah had to take the burden of captaincy after the 2010 match-fixing row.

Had there been no Misbah, Pakistan cricket might have slipped miserably at that time but he took the responsibility on his shoulders and led the side by setting examples at almost every stage. Misbah not just captained Pakistan but also gave confidence to new players and ensured the experienced one did not lose respect. Misbah has not only remained Pakistan s captain but but also a father figure in Pakistan cricket for many.

It will be an emotional moment for both Misbah and his fans to see him bidding adieu from the sport. Ahead of his final Test series for Pakistan, Misbah recently opened up on many things and expressed his feelings in a column in cricket.com.au. He started with giving the reason of why he extended his retirement by explaninig, “Initially I wanted to retire after our home series against England and India in 2015-16. But with the India series not going ahead and with tours of England, New Zealand, Australia and West Indies coming in succession, I decided to continue. I had said to myself that irrespective of what happens in Australia, the tour to the Caribbean would be my last.”

Pakistan have never won a Test series in West Indies and looking at the current Caribbean side, this is probably the best chance to create history. But Misbah still looks it a challenge and said that the Caribbean side might look weak on paper but have quality players. “To be the first Pakistan team to win a Test series in the West Indies is another factor that motivated me to push on. The Windies team on paper might appear to be weak but they have some very good players. They gave us a tough time in the tour-match in Trelawny and they also showed lot of fight in the recent one-day series. Winning in the Caribbean is still a challenge and we cannot afford to be complacent,” Misbah wrote.

Misbah recently endured a tough time with bat, especially in the Test series in Australia. He averaged 12.66 in the three-Test series, which is the second worst for him in any series in his career. However, he wants to end his career on high note and is looking forward to do that in current series against West Indies. “I have struggled for runs lately but I am keen to finish my career on a high note. I recently scored two hundreds for Faisalabad in Pakistan and I d like to continue that form by signing off my Test career in style. Most importantly, I hope that my performances can help Pakistan win the series,” added Misbah.

The 42-year-old Pakistan captain also wanted his son Faham to be there during his final Test at Dominica but due to exams, he will not be able to make it. “Since it will be my last series and the third Test in Dominica will be my last match, my wife and daughter will be there to make the occasion even more memorable,” Misbah expressed. “I wanted my son Faham to be there as well but since he will be having exams and the Caribbean is a long way from Pakistan, he won t be there. I ll be feeling his presence though as he, along with other family members, will be watching me on television.”

Along with Misbah, Pakistan’s veteran batsman Younis Khan will also be retiring after the West Indies tour. Younis is now the leading run-scorer of Pakistan and surely the most successful batsman from the nation in Tests.

According to Misbah, Younis should continue playing for couple of more years. He wrote, “It will also be the last series for Younis Khan. It has always been an honour for me to play with him and I would like to congratulate him on a successful career. My personal feeling is that Pakistan still need Younis Khan and he can play for another year or two, but I m not sure if others agree with me or not. I talked to him about it in Australia and told him that you can play on . Even though we have some very good youngsters in the team, the gap left by Younis absence will be difficult to fill.”

Misbah added further that Pakistan side will not only miss a great player like Younis but also as a mentor and added, “The Pakistan team will not just miss him as a batsman, they ll also miss him as a mentor. He has been a terrific role model for everyone and it will be very tough to replace him. Every member of this team, including myself, has learnt a lot from him. He has changed our dressing room culture. If one wants to be successful in professional life, one only needs to regard Younis Khan s organised and punctual lifestyle from breakfast to bed.”

Younis and Misbah so far had several century partnerships together and the duo carry some fond memories in their career. Both of them have often bailed Pakistan team from trouble situations in past. Talking about Younis as a partner, Misbah said, “He was my best partner on the pitch and the batting partnerships I shared with him are the fondest memories of my career. The best part of batting with Younis is he tells you how to handle the bowlers and counter the pressure. But he does not talk too much and ultimately lets you play your own game. He just makes your life comfortable out in the middle and that s why everyone loves to bat with him. I never felt pressure when I batted with him and that is the reason we have had 15 hundred-run partnerships together.”

Baton on the likes of Azhar Ali and Asad Shafiq

As the career of Misbah and Younis ends together, the seniority role will automatically fall on players like Azhar Ali and Sarfaraz Ahmed and Misbah considers it as right time to replace them. “When two Pakistan greats Inzamam-ul-Haq and Mohammad Yousuf left the scene, Younis and I tried to fill that gap. Azhar and Asad have developed in the meantime and now they are at a stage to replace us. We need Azhar and Asad to now take ownership of the Test side, and with players like Babar Azam, Umar Amin, Mohammad Rizwan, Ahmed Shehzad, Usman Salahuddin, Fawad Alam among others in the ranks I am hopeful that Pakistan will remain in good shape. Every team goes though transition periods and Pakistan is no different.”

Talking about his unforgettable moments of the career, Misbah recalled, Beating England 3-0 and Australia 2-0 in the UAE, chasing 302 against Sri Lanka in two sessions in Sharjah and 377 in Pallekele, becoming the first Asian team to win a one day series in South Africa and winning a series in India are some other unforgettable moments of my career.

Another proud moment of my time as Pakistan captain was starting the series in England last year on a winning note. After what happened in 2010, I think we badly needed a win at Lord s. We couldn t have asked for a better venue for regain some lost pride. Although the first century of my career – against India in Kolkata in 2007 – is the most memorable knock for me, getting my name on the honours board at the home of cricket and helping Pakistan to clinch a memorable victory was a fine achievement. Pakistan had not been looked upon favourably during the previous tour in 2010 and I feel we helped to change that perception in 2016, Misbah wrote, recalling his memorable moments as captain.

Shadab Khan is the latest sensation from Pakistan, who surprised everyone with his leg spin bowling in Pakistan Super League and then in T20I series against West Indies. Shadab played under Misbah for Islamabad United and the skipper considers him as one of the best finds in long-term prospect for Pakistan. “The new players will keep coming and I am glad to know that we have unearthed a great talent for Pakistan and Islamabad United in Shadab Khan. He is a fantastic long-term prospect for Pakistan,” said Misbah.

Misbah has also asked Islamabad’s management to keep an eye on Shadab and wrote, “I had suggested to Islamabad United s team management to keep an eye on him before the PSL draft. Since there was room for a youngster in our squad, we selected him keeping the UAE conditions in mind where his leg-spin bowling would come in handy. He developed himself further under the coaching of Wasim Akram and Dean Jones. We often criticize our academies and regional coaches, but I think they deserve credit for Shadab.”

“I am not surprised to see him performing at international level as well. Not only he is a fine bowler, he is an excellent batsman and fielder too. He is surely one for the future. There is no doubt about his talent but as he does not have much experience of four-day cricket, he will take some time in showing his potential in Test cricket. He had a good tour of Zimbabwe with the A team. I think it is safe to assume that if given the chance in Tests he will learn and develop quickly,” Misbah opined. 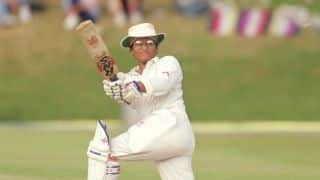 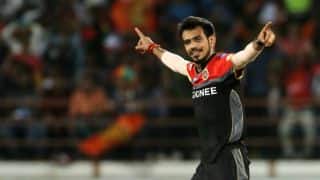