Misbah-ul-Haq's side have their task cut out to prevent a series whitewash against Australia at SCG.

Former Pakistan cricketer and ex-national team selector Mohsin Khan believes Test skipper Misbah-ul-Haq has made the right decision by postponing his retirement and focusing on the third and the final match against Australia in Sydney. Misbah, who has been one of the most successful captains in the country’s Test history, has received a flurry of criticism for his tactics after the side suffered a crushing defeat by an innings and 18 runs in the second Test in Melbourne. After losing their fifth consecutive match in Australia, Misbah had hinted that he might call curtains to his illustrious career in the coming days, even as soon as before the ongoing final dead-rubber Test at the SCG.

However, on the eve of the inconsequential Test against Australia, Misbah brushed aside speculations regarding his retirement, saying that his statement came in the heat of the moment and that he is now totally focused on a turnaround in Sydney. My statement was more in anger and frustration after the Melbourne loss. Now retirement is completely out of my mind and I am totally focused on the Sydney Test, quoted Misbah. Backing his decision, Mohsin said that Misbah, as well as Younus Khan, are great servants of cricket and that the team need them.

Younus Khan and Misbah are great servants of Pakistan cricket and the team needs them, especially to put to an end to the losing streak Down Under. I am relieved that he will lead the team in Sydney, he can always decide about his future once the game is over or on his return home from Australia, he said.

Mohsin, however, insisted that if he would have been a part of the team management, he would have never allowed Misbah to make any statement about his retirement. Pakistan are currently trailing 0-2 in the three-match series and Sydney Test is the only chance for them to avoid series whitewash. David Warner: Had no idea about the 'ton before lunch on Day 1' stat 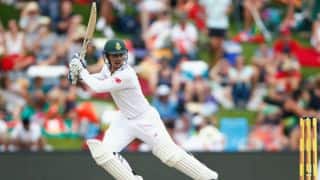