At 105 for 3, Pakistan could have easily imploded had it been the team of a not-so-distant past. Instead, the backbone of the side, the two experienced batsmen in Younis Khan and Misbah-ul Haq did enough to prove their worth to the side. 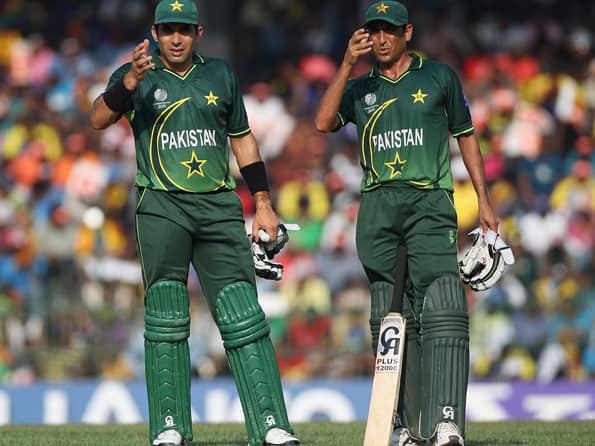 Misbah-ul-Haq and Younis Khan propelled Pakistan to 277 for 6 off its allotted 50 overs.

In the final analysis, Pakistan should be reasonably satisfied with the 277 for 7 that they got. However, what would have disappointed them is the mere 68 that they scored in the last 10 overs despite having seven wickets, the presence of two half-centurions at the crease and a batting Powerplay in hand.

That said, if Sri Lanka have to win the game at the R Premadasa Stadium, they will need to battle the slowing track and history to make it two in two.

Unlike the nervousness that Pakistan had shown at the start of the previous game, Mohammad Hafeez and Ahmed Shehzad were relatively more positive this time. Almost too positive one thought after the initial barrage of boundaries by both.

Shehzad had gone into the tournament with the reputation of being a young but talented opening bat, but the frivolities of youth seemed to have got to him. He backed away once against Thisara Perera, missed, but tried to stroke him again and could only edge it to the wicket-keeper.

That hardly deterred his partner Hafeez and newcomer Kamran Akmal. The pair took advantage of the lack of pace or lateral movement in the air or off the track and hit nine boundaries between them. In fact, immediately off the next over after Shehzad had been dismissed, Hafeez dispelled any fears of a slowing run-rate with a six and a four off Nuwan Kulasekera.

It needed a colossal misunderstanding between the two to get Sri Lanka their second wicket. Sweeping Muttiah Muralitharan to short fine-leg, Hafeez failed to hear Akmal s call in the din. The two batsmen found themselves at the same end and despite an erratic throw from Sangakkara, Hafeez was deemed run out after he strayed out of his crease.

Akmal played well to get to 39 and then played a stroke that made him a trending topic on Twitter. Herath tossed it up gently which allowed the ball to turn. To be fair to him, Akmal was probably sucked out of the crease, but by the time the ball had pitched, he was neither too close to it nor to his crease.

The end result was a stumping with the batsman within hand-shaking distance of the following through spinner. Or someplace thereabouts.

This was the start of a partnership that turned the game on its head. At 105 for 3, Pakistan could have easily imploded had it been the team of a not-so-distant past. Instead, the backbone of the side, the two experienced batsmen in Younis Khan and Misbah-ul Haq did enough to prove their worth to the side. Yet again.

If ever the New Zealand batsmen from their game against Australia needed a lesson or two in the usage of non-boundary runs as a means to build the score, the Misbah-Younis partnership was the one that they should have watched.

The pair added 108 off 122 balls and there were only four hits to the fence. Both got to their second successive fifties and the strike was rotated with as much aplomb as the Kiwi batmen found dot balls yesterday. At 213 for 4, they were in a position to rocket past 300.

Instead, the dismissal of Younis (72) brought both, Umar Akmal and lack of acceleration. Even with the batting Powerplay still to go, Misbah who had begun to struggle with a niggle by now and Akmal failed to up the ante. Akmal perished for the cause while Shahid Afridi started slowly and after a few lusty hits was consumed by Angelo Mathews.

Misbah ended unbeaten on 83 (91 balls) but one thought that the side would have been better-served with some more aggression from him towards the end of the innings.