Pakistan did to West Indies, what the Caribbean side had done to Bangladesh in their previous league game at the same ground in Mirpur. In a game as crucial as the quarter-final of a World Cup, where the captain from Caribbean had exulted on winning the toss, that was the only piece of good that happened to the West Indian side. 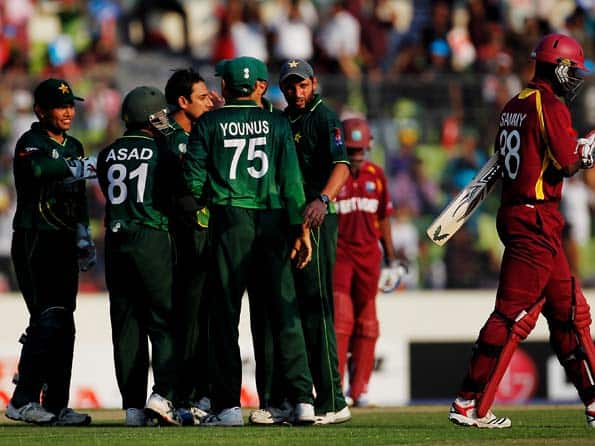 Mohammad Hafeez of Pakistan celebrates with team members after taking the wicket of Darren Sammy.

The definition of anti-climax couldn t have been more apt than the batting performance of West Indies in the quarter-final against Pakistan at the Sher-e Bangla Stadium in Mirpur.

Pakistan did to West Indies, what the Caribbean side had done to Bangladesh in their previous league game at the same ground in Mirpur. In a game as crucial as the quarter-final of a World Cup, where the captain from Caribbean had exulted on winning the toss, that was the only piece of good that happened to the West Indian side.

Batting first was a seemingly obvious choice for West Indies, being run through for 112 was worse than even the biggest West Indian cricket critic would have bargained for. The side fell 39 balls short of playing through the 50 overs.

It was not always like this though. Or at least not till towards the end of the third over anyway, by when the in-form Devon Smith had announced his Sehwag-like intentions with a four off the first ball while Chris Gayle had smacked two to the fence.

And then, out of nowhere, Gayle tried to repeat the dose to Umar Gul by getting out of the crease and spanking him only to afford a sizzling catch to the opposite captain at mid-off. Afridi held onto the hot potato like it was his baby.

Mohammad Hafeez, who was opening the bowling from the other end, and for the first time in this World Cup, was stingy in his spell. The stinginess converted into a couple of cheap wickets when Smith and Darren Bravo went in identical fashion lbw to incoming deliveries from the offie. West Indies were already three down and the late-comers hadn t even taken their seats.

The innings stalled at this stage, partly due to the situation in which the West Indies found themselves and then due to the occupation of crease by the pair of Ramnaresh Sarwan and Shivnarine Chanderpaul. The pair was slow off the blocks but did their bit to ensure that the fall of wickets was stemmed, as was the run-flow.

The pair added 42, but look 110 balls to do so, accelerating only towards the end of the partnership. Sarwan was dropped once in the course of his innings but that did not cost the side too much when Afridi had him cutting caught by the point fielder.

That was the beginning of West Indies end in the innings. After Sarwan s (24) departure, none of Kieron Pollard, Devon Thomas, Darren Sammy and Devendra Bishoo could even get to two as Afridi and Saeed Ajmal ran through the lower-middle order.

Afridi was once on a hat-trick and although he narrowly missed it, West Indies had got to a point of no return on a pitch that seemed perfect to bat on.

Chanderpaul waged his lone battle against the Pakistani bowling, helped by Kemar Roach in a 40-run stand for the ninth wicket. Ravi Rampaul became Afridi s four wicket in the game and 21st in the tournament to end the innings way short of what the par score on the pitch should have been.

West Indies lowest score against Pakistan before this was 103 all out, 14 years ago.

Cricket fever over in Bangladesh after Tigers' exit