Despite being penalised, Maxwell will be available for selection for the opening match of the upcoming Chappell-Hadlee Trophy series against New Zealand.

Melbourne: Former Australian paceman Mitchell Johnson has offered his support to embattled all-rounder Glenn Maxwell, who was sanctioned an undisclosed amount by the team leadership group following his recent comments about Bushrangers teammate and captain Matthew Wade. Maxwell had earlier this week expressed his disappointment with the fact that he is forced to bat below Wade in this year Victoria’s Sheffield Shield side, saying it is ” a little bit painful at times.” As captain of Bushrangers, the batting order is Wade’s domain and as he is now back in the Test side, Maxwell’s future remains decidedly uncertain, despite his fantastic First-Class record.

“That’s probably a little bit painful at times. I think probably batting below the wicketkeeper is also a bit painful as well,” Maxwell had said. “I think the wicketkeeper should be batting at seven unless you’re trying to squeeze an extra bowler into your line-up. I’ve been just trying to bat wherever I can and trying to make as many runs as I can. I got a hundred from No. 8 for Victoria so there are always opportunities to get runs wherever you are in the order,” he added.

Johnson, who retired from international duties last year, took to social media to express his disappointment over Maxwell’s fine. Backing Maxwell’s comments, the 35-year-old questioned the fine levelled against the all-rounder before insisting that he was only being honest in his opinions. “A fine, really!!…Should be batting in front of a wicketkeeper considering he is a batsman,” Johnson tweeted. “He was only being honest right??…Are you going to pick a bloke who hasn’t made a hundred in two years?” he added. Earlier, skipper Steve Smith criticised Maxwell for his comments about Wade, dubbing them as “very disrespectful”.

“I guess one of our values is respect, and having respect for your teammates and your opposition, and your fans, your media. I thought what he said was very disrespectful to a teammate and his Victorian captain. So the leadership group got together and we decided to fine Glenn, we thought that was a sufficient punishment, so we’ve gone down that path,” the skipper said. READ: Australia vs New Zealand 1st ODI Preview

Despite being penalised, Maxwell will be available for selection for the opening match of the upcoming Chappell-Hadlee Trophy series against New Zealand at the SCG on Sunday. If selected, Maxwell will be playing his first ODI in more than five months after he was dumped from the Australian squad following a lean tour of the West Indies mid-year. The Sydney ODI would be followed by matches at Canberra and Melbourne on December 6 and 9 respectively. 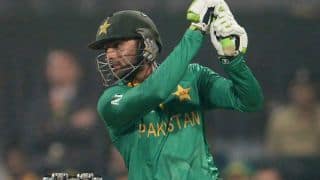