It is predicted that the pitch for the next Ashes Test could be similar to that of Edgbaston.

At Edgbaston on day three of the third Test the ball was swinging and seaming like anything. Due to this batsmen were finding it difficult to score runs. It was also the first Ashes clash which took place without a century since the Sydney Cricket Ground (SCG) Test eight years ago. Australia’s astonishing collapses in Birmingham will be supplemented with the Trent Bridge strip which appears to be similar. The Trent Bridge Test pitch in 2014 was also a very fast pitch where 1344 runs were scored in the drawn match between India and England as David Boon who was the match referee slammed the strip to be not conducive for play.  READ: Ashes 2015: Inconsistent England to take on out of sorts Australia

When International Cricket Council’s guidelines were espoused in 2010 it was the first time that an English deck was rated that way. Most of the England and Wales Cricket Board (ECB) officials along with consultant Chris Wood spent most of their time around the Trent Bridge. However, Australian strike bowler Mitchell Johnson does not expects any changes  after the Australians lost the Edgbaston Test by eight wickets.

Johnson said in a conversation with cricket.com.au “I’d say it would be pretty similar to the last wicket. They did well there, so they’d probably want to prepare something similar. I’m pretty happy with that. The boys are saying it looks pretty hard … hopefully we get a nice, bouncy wicket here again and I’m sure you’ll see a few more short balls.” Off-spinner Nathan Lyon said, “There’s been a bit more heat here, which is going to dry it out a tad more,” Lyon said. “I don’t think it’ll be quite as friendly as Edgbaston.” ALSO READ: Ashes 2015: Stuart Broad warns England of Michael Clarke ahead of 4th Test at Trent Bridge

England fast bowler Stuart Broad also acknowledged this and said, “I remember the India Test last year we were looking at it two or three days out and going it is ready to go now. It was so dry.” Broad further said “I don’t think it is like that. The groundsman has worked extremely hard. He has been in contact with the Edgbaston groundsman as well. I thought that it was a fantastic pitch. I am sure Trent Bridge will try and emulate that.” 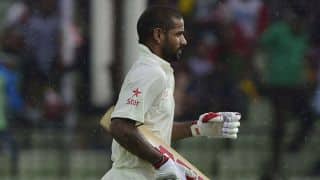