Mitchell Johnson has won the award for the first time in his international career.

Speedstar, Mitchell Johnson has been conferred with Australian Cricket’s highest individual honour, the Allan Border medal for his outstanding achievements during the recently concluded Ashes series at home.

Johnson beat heavy competition from captain, Michael Clarke, who was thought to be the pre-poll favourite to win the coveted honour for a record-breaking fifth time.

Clarke began as the leader on count, but Johnson’s 37 wickets at an average of 14 in the Ashes got the better of the Australian skipper.

Clarke, though didn’t return back from the ceremony empty-handed as he won his fourth Test player of the year award.

”It has been an amazing journey. Coming back from injury and having a lot of doubters I just knew in my own heart that if I had the opportunity again that I could make the most of it,” Johnson said in an interview to Sydney Morning Herald. 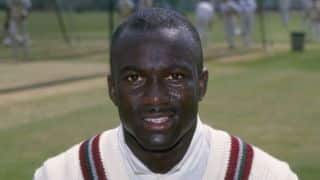