Shane Watson’s former housemate and current assistant coach of the Perth Scorchers, Adam Griffith, has been the force behind the Scorchers’ bowling success in their journey to the Big Bash League semi-final. The Scorchers face Melbourne Stars at the WACA on Sunday in the second semi-final.

Griffith was part of the Sheffield Shield-winning Tasmanian team in 2006-07. Apart from being grateful to his bowling guru Troy Cooley, Griffith also hails Dennis Lillee as a big influence.One of his earliest coaching high points was when the current Australian pace spearhead Mitchell Johnson sought his help after tearing the latter’s toe ligament injury in 2011.

“It was a good time for him to do that because he wasn’t happy playing cricket,” Griffith said. “We did some stuff with his action and sorted a few things out. We straightened his run-up, got him running better and lengthened his run-up.  He’d also been sitting down on his back leg again and trying to generate his pace by muscling the ball instead of letting it flow. But mostly for him, it was about wanting to become the best player in the world again.”

Griffith reveals that Western Australia has dedicated in finding fast bowlers.  “You could see there were class bowlers out there, they just hadn’t been developed,” he said.

“If you can develop your own and get a reputation for developing your own and playing your own, that gets around. The ideal scenario for me would be to have four of our blokes playing Test cricket and then the next four blokes be just as good. There’s a lot in the system at the moment.”

Speaking about Joel Paris, Griffith feels the left-arm pacer will become an “outstanding fast bowler” in the future. However, he also cautioned coaches against stereotyping bowlers. “Be yourself, don’t get pigeon-holed into certain ways,” he said.

“What we love about our bowling group is that they’re all different. If you bowl fast, bowl fast and if you swing the ball, swing the ball. We can teach you how to do all that other stuff like hit the same spot. The three things I always look for are if they bowl fast, or swing the ball, or are they six-foot-six (198cm). If you’ve got one of those things, I want to have a look at you. It’s as simple as that.”

The former Tasmanian player said Justin Langer’s “toughness” has been the key element in Western Australia’s revival.  However, his main focus has been the Big Bash League semi-final now. “Let them go … I think it’s an important part of what we do,” Griffith was quoted as saying by The West Australian.

“Coults [Nathan Coulter-Nile] does – but he gets angry with himself and then gets angry with the batter – and I think it’s something Dorf [Jason Behrendorff] is getting better at.”

“We don’t talk about sledging, we talk about having a presence out there and if that means getting in the face of a batsman then that’s part of what you do. But if you’re on top of him, you’ve already got that presence and don’t need to say anything and that’s what our guys are really good at.”

“They go at a batsman as a team, the mentality of 11 on two is something that’s big for us. We’re talked about as the team which can defend anything and that, to me, is outstanding. No one gave us a chance this year because we’ve had so many of our best players out.” 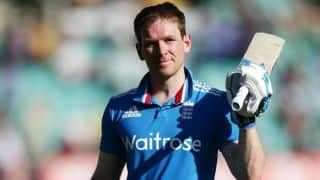 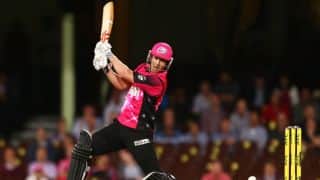