Mitchell Johnson will have to fight for place in Australia team: Mickey Arthur

Mitchell Johnson will have to fight for place in Australia team: Mickey Arthur

Australian coach Mickey Arthur warned paceman Mitchell Johnson on Tuesday he will have a fight on his hands to regain his place in the team with the emergence of young quick Pat Cummins. Australian coach Mickey Arthur warned paceman Mitchell Johnson on Tuesday he will have a fight on his hands to regain his place in the team with the emergence of young quick Pat Cummins.

Cummins, 19, and the experienced Johnson, 30, broke down with foot injuries during Australia’s Test tour of South Africa in November but have been recalled for the one-day series against Ireland and England in June-July.

“Mitchell Johnson returns and we can’t wait to have him back around the group,” Arthur said on the Cricket Australia website.

“He may have to wait his turn though, as we are taking such a talented group of bowlers on the tour with us.”

Johnson’s roller coaster career was in limbo after he injured ligaments in his left big toe while batting in Australia’s Test victory over South Africa last November and he missed the entire Australia season following surgery. But he has said he is now feeling mentally and physically stronger than at any previous point in his career.

Despite his return to the team, Cummins could stand in his way with Arthur pinpointing the youngster as one of Australia’s most promising prospects.

“The player I am most excited about is Pat Cummins, we all saw what he could do in his one and only Test match and to have him back in the mix is fantastic,” said the South African.

“He has the ability to become one of the best in the world. He and Patto (James Pattinson) will take a huge amount out of this tour.
“We hope they both will be firing this time next year when we go to England to claim The Ashes back and drawing on the experience of ouring the UK before will certainly give them an edge.”

Arthur, meanwhile, expressed support for the Test batting lineup in a vote of confidence in veteran Ricky Ponting.

“I am very happy with where our Test team is headed,” Arthur said.

“Continuity in selection and role clarity is so important in creating team culture and I know that all players now know where and how they fit in. We have a settled top six now and, together, this unit has played seven Test matches.”

Ponting averaged just 24.33 in the three recent Tests in the West Indies and his position has once again come under scrutiny. (AFP) 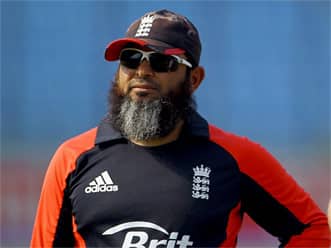 Pakistan may not appoint Mushtaq Ahmed as bowling coach