Mitchell Marsh has suggested that he now aims of making the No. 5 position in Australia’s limited-overs squad permanently for himself. Marsh, who stayed with Glenn Maxwell till the end in the virtual semi-final against West Indies in the Tri-Nations Series 2016, scored an unbeaten 78 off 85. The duo helped Australia defeat the hosts by 6 wickets and qualify for the final of the Tri-Nation Series 2016. Marsh, who has been brought in the squad as an all-rounder replacement for recently retired Shane Watson, has been in and out of the team for various reasons like injuries and poor form. Full Cricket Scorecard: West Indies vs Australia, Match 8, Tri-Nation Series 2016 at Barbados

According to cricket.com.au, Marsh Junior spoke termed his knock against the Caribbeans as satisfying. He said, “Any time you can bat through an innings and be not out in a win, and in a crucial chase like that, it’s very satisfying. Sometimes you miss out a few times and it’s really key not to get down, keep backing my skill. That’s what I’ve done. I’ve worked extremely hard in the nets in the past few days and it’s just nice to see it come off.”

Marsh averages 39.7 in the one-day format but the average shoots up to 61 whenever he has batted at the No. 5 slot for Australia. He was roped in the playing XI in the tri-series ever since Australia’s talented opener David Warner was ruled out of the remainder of the series with a broken finger. READ: Glenn Maxwell’s innings against West Indies left me speechless, says Mitchell Marsh

Elaborating more on the No. 5 position, the 24-year-old all-rounder said, “Hopefully I can really knuckle down and nail down No.5. I think it’s a great position for me to bat in one-day cricket,” Marsh said. It gives me a lot of time to get into my innings and obviously the more balls I face, the easier it becomes at the end.” 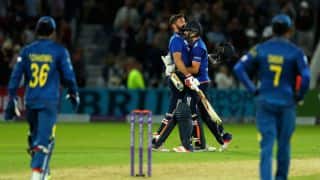